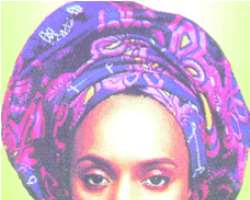 Ahead of this week's Peoples Democratic Party (PDP) primaries to elect candidates for National Assembly elections, indications have emerged that, Maryam, wife of an incumbent member of the House of Representatives and eldest daughter of the late President Umaru Musa Yar'Adua may have been offered the Reps ticket on a platter of gold.

Maryam, who is married to Hon. Badamasi Kabir Usman, was spared a tough contest for the office as all the gladiators that were struggling to make it to the National Assembly have been reportedly directed to step down for her.

Ironically, her husband who hitherto declared his bid to return to the lower chamber of the National Assembly had been hospitalised in London since he fell into a coma about a fortnight ago.

The lawmaker who is also the son of the late Emir of Katsina and younger brother of the present Katsina monarch was said to have fallen into coma in his hotel room overseas but nobody discovered his situation until after about 24 hours.

The automatic ticket given to Maryam who is also a Special Adviser to Governor Ibrahim Shema has caused an uproar in the party. The ruling party had about a week ago screened aspirants for the National Assembly elections. Members of the party screened to contest for the Katsina Central Federal Constituency include the state Commissioner for Youths, Bishir Gambo Saulawa, Abba M. T. Usman, proprietor of Liyafa Palace Hotel, and about four others.

Investigations showed that former First Lady, Turai, and Maryam had since travelled to London to nurse the lawmaker whose condition was believed to be in a critical condition. Speculations that Badamasi had actually died swept through Katsina early in the week. But this had been refuted by sources close to the family. A dependable source who pleaded anonymity told Daily Sun that the directive to stop other opponents of Mr. Kabir Usman and allow Maryam to fly the PDP's flag in the next general election emanated from 'government.'

Contrary to expectations that Turai exerted her influence to give her daughter the party ticket, investigations revealed that Maryam was awarded the ticket by PDP chieftains still sympathetic to her family.

Meanwhile, a Board of Trustees (BoT) member of the PDP, Professor Jibril Aminu had alerted President Goodluck Jonathan and the national leadership of the party not to accept the rescheduled ward and local government congresses said to have been held in Adamawa State in view of the fact that it was glaringly manipulated by the state leadership of the party.

Senator Aminu, described the said Tuesday congresses as an outrage; a charade, and a slap on the face of democracy and national leadership of the PDP. He alleged that the rescheduled congresses could not hold because the prospective voters were disenchanted with the approach taken to conduct the congresses.

The PDP chieftain, who addressed newsmen at his Yola, residence, on Wednesday maintained that the earlier result of the congresses held on Tuesday, 28th December 2010 should rather be accepted by the national leadership of the party, while that of Tuesday 4th January, should be out rightly be discarded.

The Senator representing Adamawa Central Senatorial District alleged that there were no officials of INEC nor officials of the PDP at the wards across the state to conduct the congresses.

The PDP chieftain also alleged absence of registers of members at the wards, lack of adequate publicity about the congresses to members of the party in the state, adding that the party leadership had agreed prior to the conduct of the congresses to use valid membership cards for authentication of prospective voters at the ward congresses but these were disregarded. According to him, it was only security operatives that were seen in most of the wards whose presence were obviously not needed in a situation where those who should be voters were absent occasioned by their disenchantment about the rescheduled congresses.

The Senator, representing Adamawa Central Senatorial District, also alleged that the state chairman of the PDP, Alhaji Umar Mijimyawa Kugama, who was an aspirant for the House Representatives came to the state along with the committee members detailed to conduct the Tuesday, January 4 rescheduled ward and local government congresses of the party.