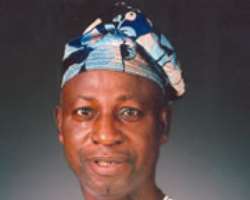 The national president of the Association of Nigeria Theatre Arts Practitioners (ANTP), Mr. Victor Ashaolu, in this interview with GBENGA OLUMIDE, spoke about how he emerged as president of the association, his relationship with other contestants, among other issues. Excerpts:

How is ANTP now?
ANTP is okay. We are doing fine. There is no problem whatsoever.

But recently, there was pandemonium at the court premises in Ibadan between your faction and other contestants' faction. What really triggered it off?
I don't think there was any crisis. What happened in our association is a natural thing, and it is part of human life. I want to say that since I became the national president of the ANTP, peace has started reigning.

You said you are now the new president of the ANTP, when was the election conducted and where did it take place?
Well, the election took place in Ilorin, Kwara State, on September 22, 2010. Those who believe that the election has not been conducted are those who lost at the election. It is not everybody who agreed with the outcome of the election but majority carries the vote. You know, Nigerians never accept defeat just like that, when it comes to an election. There were about 17 contestants who lost at the election. But there was a contestant that Prince Jide Kosoko was carrying about. Kosoko, who is supposed to create a peaceful atmosphere in the association, but because of his selfish interest, he now told this contestant not to accept the outcome of the election, trying to scuttle the efforts of the elders. And because he wanted to perpetuate himself in the office, he went to file a motion, asking the court to declare him as president after he had left the office in February 26, 2010.

After the election, has there been any general meeting?
Yes, after I was elected as the president of the association, we've had our meeting at Ososa in Ogun State.

What is the position of elders on the matter on ground?
The elders are fully in my support. Towards the end of 2009, precisely, December 14, Kosoko was still the president then, he invited the majority of the elders to a meeting at Floreb Hotel, Aromolaran Street, Old Ife Road, Ibadan, Oyo State. Members of the national executive council were also there, including the contestants. Apart from Kosoko, three out of four that constituted the Board of Trustees (BOT) were also in attendance, where Kosoko appealed to them that he wanted nothing but lasting solution in the forthcoming election of the association by coming together to pick a candidate through consensus among the presidential aspirants. Three out of four of us who were contesting for the position of president, Dele Odule, Yemi Solade and myself were present. The only person who was not at the meeting was Andy Abuede, but he took permission that he would not be able to attend.

The elders asked us, including Kosoko, if we were going to abide by the decision of the elders. Kosoko said that he was not contesting again, that he was only trying to bring everybody together and that he wanted two of the aspirants to step down for Ashaolu, but that has not been accomplished. He said the elders are the stakeholders and leaders of the association and whatever they arrived at would be final.

About seven of the elders were picked by Kosoko, and out of these seven, there were three BOT members. They were given about one-and-a-half hours to ruminate about this issue. After some time, they came to Kosoko and they also called the three of us who were the presidential aspirants. They asked again if we were ready to abide by their decision. We all answered in the affirmative. Chief Lere Paimo, who was the chairman of the seven-man committee, mandated Adebayo Salami a.k.a. Oga Bello to announce their decision. Oga Bello said having gone through the list of aspirants, they unanimously picked Victor Ashaolu as presidential candidate for that election. When they announced my name, the place was silent for about two minutes. Kosoko asked us again that now that we've heard the elders, what is our position. We all said we agreed with the outcome of their meeting.

After, I was asked to give my acceptance speech, which I did. I thanked everybody, especially my co-contestants, Dele Odule and Yemi Solade. I embraced them one after the other. The elders asked the two of them which other vacant position they wanted. Odule said being the outgoing vice president, he wanted to rest for now. That was how everything went that day.

But to my surprise, those who had agreed to abide by the decision of elders now went to media, both print and electronic, claiming that the elders have no constitutional rights to have done that. They bastardised me and the elders' names. It was funny to hear Jide Kosoko supporting Dele Odule in saying that what the elders did was unconstitutional. You can now see those who are really causing problem in the association.

Don't you think the association is already divided?
The association is not divided because we have only one president. I was duly elected by members of our association because when they did not agree with the consensus candidate, Odule and his people went to organise another election, but Yemi Solade and Abuede did not take part; they said they could not go against the decision of the elders. And when the election came up on September 22, I won. I came to the position through election and not by consensus. If we are to hold election 50 times, I will always beat Dele Odule. Yemi Solade is the publicity secretary in my government now, while Abuede is one of the ex-officio members.