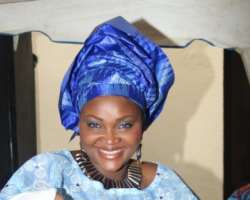 If rumours spreading like wild fire about the husband of Yoruba actress, Mercy Aigbe, are anything to go by, then the dude, Lanre Jentry, is seriously broke at the moment.

The Hotel La Veronique boss, who recently celebrated the birth of a baby boy by the actress, is said to be going through a financial crisis for sometime now.

Sources close to Larry Jent, as he is fondly called, said he has no car at the moment. His grey-coloured Tuareg car has been seized because he was unable to complete the payment for the car.

He was said to have bought the SUV from one Architect Tunde Ojo, who had to retrieve the vehicle when all efforts to get his balance payment from Larry Jent proved abortive.

According to the source, “the financial recess is everywhere in the world, and Larry Jent is also affected. It is true that he has no car now, but I hope he will sort things out soon. If Mercy had not been involved in an accident with her Honda Element SUV, both of them would have been managing it, at least for now.”

Efforts by NollywoodReel to speak with Larry Jent proved abortive as he did not answer the calls made to his Glo mobile number. A text message was also sent to him but he did not reply.