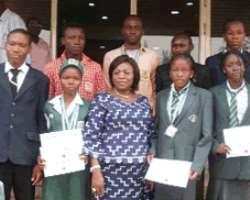 PHOTO: THE SUN PUBLISHING
More Stories on This Section
Deputy Governor of Lagos State, Princess Sarah Adebisi Sosan, has expressed confidence in the quality of education in the state saying it was the only key to develop the society. The Deputy Governor revealed that many parents were already withdrawing their wards from private to public schools because of quality education.

She said this while commissioning and inspecting the newly reconstructed Obalende Primary School, Ijeh Road by Esso, an affiliate of ExxonMobil, which has a Production Sharing Contract (PSC) agreement with Nigerian National Petroleum Corporation (NNPC).

During the tour, which was lead by Mrs. Gloria Essien-Danner, Executive Director and General Manager, (Public and Government Affairs) EEPNL, Sosan said that the state government was bent on providing infrastructure, furniture and policy to change the face of education.

'On behalf of His Excellency, we are happy because this is in line with the government's goal to build education because it is fundamental.'

She noted that 'right now, many parents are withdrawing their children and wards from private schools to public schools because of quality education that the government is giving.'

She thanked Esso and partners for their thoughtfulness and performance and also parents, teachers and students while urging them to take care of the edifice to prove that they appreciate it.

The Chairman, Eti-Osa Local Government (Ikoyi-Obalende Local Council Development Area), Mr. Rasaq Adewale Adeniji, pledged that his administration would not relent in its stride towards providing sound and quality education.

He noted that education was not just a means of acquiring knowledge but about generating values and that it was the beginning of a lifetime contribution and impact to humanity.

In his remarks, the Group General Manager, National Petroleum Investment Management Services (NAPIMS), Mr. M. Fiddi, (represented by the Public Affairs Manager, Mr. Kenny Obateru), noted that the laudable project, the building of the edifice – one storey building comprising 28 classrooms, two offices, two waiting rooms, two staff rooms, 37 conveniences, one library, one sickbay with adjoining office, a playground and fencing/gate house for the school complex, at the cost of about N82m, was a manifestation of NNPC and her partners' commitment to capacity-building in the sphere of education with emphasis on infrastructural development.

He said that the Corporate Social Investment (CSI) was in furtherance of a commitment to invest and upgrade the educational system in Nigeria and Lagos State in particular.

According to him, the NNPC, represented in the PSC arrangement by NAPIMS takes very seriously, the need for provision of sound education for the Nigerian child, as they are the future of the nation.

Chief Financial Officer, ExxonMobil Upstream affiliates in Nigeria and Vice Chairman, Mobil Producing Nigeria, Mr. Cyril Odu, said the handover was in continuation of their practical demonstration of their commitment to their social responsibility, especially in countries and communities where they operate.

'Over the years, we have learnt one key principle of partnership and engagement with all stakeholders.

Our corporate citizenship programs place high premium on education, particularly, the provision of quality infrastructural support in schools. That is why in 2007, working with Ikoyi Obalende Local Council Development Areas and the State and Local Government Programme (SLGP), which is a division of the United Kingdom's Department for International Development (DFID), we identified the Obalende Primary School as a major project for development.'

The children thanked the state government, ExxonMobil and partners for removing them from an unfit environment, while Chairman, Ijeh Community Development Association, Mr. Lanre Thorpe expressed his happiness for the timely intervention.

In a related development, the State Ministry of Education, in collaboration with Lake Point Institute, has launched the Lagos State Education Year Book at the Adeyemi Bero Auditorium, The Secretariat, Alausa, Ikeja.

Speaking at the event, the Deputy Governor, Princess Sarah Adebisi Sosan said the book was specially packaged to document the various policies and programmes in the education sector as well as its achievement since the state's creation in 1967.

She noted that the publication is enriching and informative for Nigerians at home and in the Diaspora, especially students who have never visited the country but wish to know more about educational development in the state.

Princess Sosan reiterated that the education year book catalogued the strides of heroes past and current efforts at ensuring that the education sector is raised to that enviable standard where its products would conveniently hold their own against products of other climes.

She added that the publication would serve as a general reading material for all Nigerians especially those interested in the development of the state education sector.

Earlier in her address, the Permanent Secretary in the ministry, Mrs. Omolara Erogbogbo said the education year book launched is a complete compendium of individuals, groups and corporate organizations that have worked tirelessly both, in the past and present, to make Lagos State the pacesetter in the delivery of quality education in the country.

Mrs. Erogbogbo said the ministry would continue in its developmental strides as promised by the present administration led by Governor Babatunde Fashola in pursuit of the delivery of quality education with the continual training, development and improvement in the quality of teachers and the environment in which they work.

Also speaking at the event, a former Commissioner for Education in the state, Dr. Leke Pitan, added that Lake Point Institute has done so well in collaborating with Lagos state government to compile a book of the history of the state's education sector, and urged parents to help their children learn appropriately.

The chief launcher at the event, Barrister Alade Akesode, said the administration has really upgraded the standard of education, and pledged his support for the state's education sector in the days ahead.