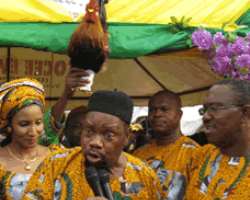 He gave the assurance yesterday at the All Progressive Grand Alliance (APGA) rally in the three Senatorial districts of the state, which took place at Onitsha for Anambra North; Ekwulobia for Anambra South and Awka for Anambra Central.

While addressing party faithful, Obi said he was constantly in touch with those treating the Igbo leader and that the daily reports were very cheering. He urged Nigerians to continue praying for him, with assurances that he would come home in improved health.

Obi did not disclose the hospital where Ojukwu was, saying with ex-warlord's capacity to pull crowd everywhere he was no matter the condition, revealing the hospital might cause influx of people to the hospital. In his words: 'Go and ask doctors at the University of Nigeria Teaching Hospital, Enugu, where he was hospitalised before his trip to London. The moment it was written in the newspapers, the hospital faced the problem of crowd control, noboy wishes it for the London Hospital.'

Preaching about commitment to Igboland, the governor said in all his meetings with Ojukwu, he (Ojukwu) had consistently told him two things, not to forsake the Igbo people no matter the circumstance and not to expect thank you from them.

In Obi's words: 'The last thing he said to me, when he was already down with the current sickness, before it developed further, was to remain an Igboman in all its ramifications and to continue to do whatever is possible for the ultimate good of Igbo people. Do them without expectation of payment, but out of love for the Igbos.'

Calling on party faithful to emulate Ojukwu, Obi added: 'In him, I saw a unique personality that will always advise on what will be for the good of the Igbos without seeking, as many other people do, his entitlements or any form of gratification.'

Exhorting APGA faithful on the coming election, Obi said with APGA's victory at the gubernatorial election, under Ojukwu's command, the best APGA could do for him was to win the forthcoming elections in the state. He cautioned, however, that to achieve this, that APGA would have to field qualified and capable candidates, without sentiments.