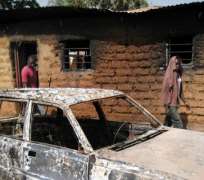 From time to time great writers and commentators are always quick to quote the famous British statesman and philosopher Edmund Burke who lived from 1729 to 1797. Mr. Burke is always quoted to have said that ‘If good men do nothing then evil will triumph.’ That I believe is the case of the unnecessary carnage in Jos Plateau State and now Maiduguri Borno State. Ironically both Plateau and Borno States parade themselves as “Home of Peace.”

I have lived fairly long enough in Jos to write on the crises that have bedeviled the once beautiful and peaceful city. It is still safe to say that despite the many a crisis that have rocked the city, so many businesses and especially Banks are still springing up in the city from time to time. Traffic jams are ever increasing.

The re-occurring crises in Jos simply put are as a result of the fact that no one single person has been punished since the first crisis occurred in September 2001.

It is amazing however how forgetful we seemed to be about the protracted Jos crises. Some commentators blame it outright on Governor Jonah Jang. Even amongst the Plateau elites who have been witnesses to the protracted crises from 1994 to 2010.One think that is clear however is that the Jos and Plateau crises pre-dates the Jonah Jang administration as we all know. Governor Jonah Jang’s fault I think is that he wants to develop Plateau State and bring back its glory which is being resisted both within and without.

By providence the Plateau people decided to vote for him to be the governor in 2007. Those who hate Plateau State continued with their attacks on Jos unabated. While the 2008 crisis was attributed to election results, can honest people tell us the causes of the January 2010 and December 24, 2010 bomb blasts in Gada Biu and Anguwa Rukuba areas of Jos?

The earlier the Plateau elite realise that all the persistent attack on Jos is simply an expansion program by violence. Otherwise go to Yan Shanu, Congo Russia, Dogon Karfe, Ali Kazaure areas of Jos.

Until the Federal government of Nigeria is bold enough to punish the sponsors then the peace will continue to elude Jos.

Alternatively state police must be legalized which will be able to investigate and prosecute the sponsors of the Jos terrorists.For now the Plateau elites and their elders have failed their people.

The Federal government of Nigeria has failed Nigerians living in Jos as was the case of the four National Youth Service Corp members murdered during the 2008 crisis in Jos.When and where will the next bomb go off in Jos is a matter of time since a secondary school chemistry teacher was said to be doing practical chemistry on public holiday with bomb making devices. In Nigeria everything is possible if you have a lot of stolen wealth to buy the security agencies and the press.

While Joshua Dariye can have some rest, Jonah Jang will still carry the Plateau State cross till 2015. Plateau people must breast for more vicious and violent attacks in more years to come. As it is now Jos has almost fallen. After the conquest of Jos where next will the marauders go?

Unless and until the Federal government of Nigeria is firm and decisive in punishing the sponsors of the Jos mayhem, it might not end in 2015 after the Jonah Jang administration even as did not end after the Joshua Dariye administration in 2007.But as Edmund Burke said, evil will continue to triumph if good people do nothing or say nothing.

Nigeria or Nigeria. Ndiameeh Babrik is at [email protected]