WHY ATIKU SHOULD BE PRESIDENT â€“ONYIA, EX-MINISTER 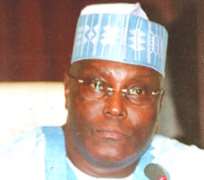 •Atiku
Chief Dubem Onyia, former Minister of State for Foreign Affairs, says he is supporting Atiku Abubakar for president because the former vice president is a true democrat: 'When Obasanjo decided to derail democracy, when he decided to make himself life president, Atiku had a choice.

A choice of going along with him, but Atiku refused to go along with him to make himself life vice president. Because of his belief in democracy, he fought to stop Obasanjo from making himself a life president.'

In this interview with Daily Sun, Onyia also lambasted the leadership of Ohaneze Ndigbo for endorsing President Goodluck Jonathan. Excerpts:

Supporting Atiku for president.
I am supporting him because he is a true democrat. Atiku was part of the formation of PDP. He fought for the enthronement of democracy in this country. He went on exile during the military government because he believes in true, transparent democracy. He was instrumental to the making of the first civilian president after the military government which is Chief Olusegun Obasanjo.

When Obasanjo decided to derail democracy.
When he decided to make himself life president, Atiku had a choice, a choice of going along with him, but Atiku refused to go along with him to make himself life vice president. He would have remained life vice president and wait for who will die first and take over the presidency. But because of his belief in democracy, he fought to stop Obasanjo from making himself a life president. And that endangered his life, endangered his career because he put his resources into it.

He stepped down for MKO Abiola in 1993.
He would have taken over the government in 2003 because the governors came to him. He said no, the power had been in the North for a very long time. Therefore a man who was elected governor, who has been vice president for eight years, who is a true democrat, who has staked everything he has for the enthronement of democracy, who believes in the rule of law, I am ready to support him.

When he was fighting Obasanjo for the enthronement of democracy, he fought it through the rule of law. He went to court and he did not use thugs. That is why we want somebody who knows the pulse, the feelings of the people of this country. When we were in the Federal Executive Council (EFC), he disagreed with the president on his power policy. He told him that it would never work.

The mMnistry of Niger Delta was part of his policy but because they did not know what they had in mind when they conceived it, they took it, they couldn't implement it. What is the purpose of the Ministry of the Niger Delta in Abuja? It was meant to be sited in the Niger Delta. When FCT was conceived in Lagos, they brought the Ministry of the FCT to Abuja. First of all in Suleja, before they moved to Life Camp so that they can provide amenities for the people. So I am supporting a democrat. Somebody that I am convinced and I know it that he would provide the requisite resources for the people of this country.

Ohaneze's endorsement of President Jonathan.
Who is president of Ohaneze? Ralph Uwueche. Ohaneze does not involve itself in making political statements of such nature. When Chief Alex Ekwueme was running for president, Ohaneze never endorsed Ekwueme publicly. Ohaneze supposed to be neutral. It is meant to look out for the welfare of the people.

Ohaneze should be busy working for the emergence of an Igbo president come 2015. Forty years after the civil war, an Igbo man has not been president. Ohaneze has not said anything about it. Ohaneze has less than N10, 000 in its coffer and they are taking paid adverts everyday where did they get the money from? I will want to see my children or my grandchildren become president of this country. We cannot through the support of Jonathan.

Do you think that the South-South will hand over to Igbo president after 2011? They will not. It is not possible. The only way to ensure peace and stability in this country is to ensure that every zone has a taste of the highest office in the land. Therefore, the Igbo man's interests, 2015 for the Igbo, is sacrosanct.

Divine intervention
An Ijaw man would have been president after the eight years in the North, it will either come to the South-South or the South-East. Jonathan coming to run now is destroying the zoning system and he is doing damage to his children and grandchildren. I am a founding  father of PDP. Rimi's money was returned to him because of this zoning thing. If you go to Somalia, Rwanda, Burundi and all those places where they have wars, you will know that it is better for us to maintain zoning in this county.