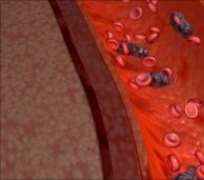 The fight against malaria and TB in the developing world should not obscure the problems poor countries face with hospital infections, experts say.

A team led by World Health Organization researchers found poorer countries had much higher infection rates than the developed world.

They reviewed 220 previous studies, finding infection rates were three times higher than in the US.

But they said the issue was going largely unnoticed, the Lancet reported.

The team, which also included Professor Sir Liam Donaldson, the former chief medical officer for England, looked at data going back to 1995 on a range of healthcare-associated bugs, including urinary tract, bloodstream and surgical site infections as well as hospital-acquired pneumonia.

Researchers found the infection rate in developing countries was 15.5 per 100 patients. In Europe it is 7.1 and in the US, 4.5.

The difference in intensive care infections was even greater. In developing countries, infection rates were 47.9 per 1,000 patient-days, compared to 13.6 in the US.

Professor Didier Pittet, one of the lead researchers, said: “There can be a misconception that healthcare-associated infections are not often found in developing countries, simply because their healthcare systems are blitzed with other issues that high-income countries have dealt with or controlled long ago.”

Dr Victor Rosenthal, of the International Nosocomical Infection Control Consortium, which was set up to tackle hospital infections globally, welcomed the research, saying: “Health-care-associated infections in developing countries are a serious issue that is scarcely addressed in the scientific literature.”

He added it was likely the higher infection rates were leading to deaths, longer hospital stays and extra costs and called on steps to be taken to tackle the problems.