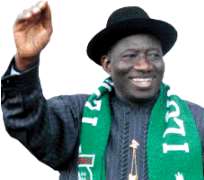 Jonathan
At the last count, there were over 1,800 recognised associations and pressure groups drumming support for the actualization of President Goodluck Jonathan as the flag bearer of the Peoples Democratic Party (PDP) for the 2011 general election.

The groups came in different names and have various styles and modus operandi in campaigning for President Jonathan. But analysts argue that many of such groups are more preoccupied with schemes to outsmart one another. Their strategies include blackmail and backstabbing just to have an upper hand in the political chess game towards positioning themselves ahead of the forthcoming general election.

Political observers believe that names and the identity of those behind their formation are difficult to get owing to their instability and unknown addresses. They can just be said to be around and about as they only appear when they have the need to gather for a purpose after which they go underground again like volunteer fighters.

While some have known and fixed addresses with established structures, others exist only on pages of newspapers and television sets which they use effectively to propagate their mission all in an attempt to get the attention of the presidency with the hope that all other things will follow. Unfortunately for most of the groups, some political office holders within the corridors of power in Aso Rock Villa understood the game being played by the associations and groups and the possible backlash it could have on them with regards to loyalty.

The first move was that orchestrated by some aides of President Jonathan led by Senator Mohammed Abba-Aji who is the Special Adviser on National Assembly Matters and Dr. Cairo Ojugboh also Special Assistant to the President (Senate) who formed 'Friends of Democracy for Jonathan' with a view to get all other associations under its umbrella. It was really a tall political ambition as the associations and groups refused to accept the directive of the Senator Abba-Aji led group directive to get them subsumed.

Apart from the battle by the Senator Abba-Aji led 'Friends of Democracy for Jonathan' to get other organizations subsumed into its fold, members of the group soon got entangled in internal battle of wits as the Directors tried to outdo one another in an attempt to get President Jonathan's ear with the understanding that one of them could get appointed as Director General of the main Campaign Organization.

It was at this point that the Chief of Staff to the President, Mr. Mike Oghiedomen was believed to have moved quickly and got people like former Minister of Sports Samaila Sambawa, Ahaji Ahmed Gulak, Princess Stella Oduah, former Deputy Governor to Niger State, Dr. Shem Zagbayi and Mrs. Ngozi Olejeme and others to form a new group, 'Goodluck Support Group' (GSG) with one time Speaker of Adamawa State House of Assembly, Alhaji Ahmed Gulak as National Coordinator while former Minister of Sports, Alhaji Samaila Sambawa, Princess Stella Odua and former deputy Governor of Niger State, Dr. Shem Zagbayi were made members of the National Coordinating Committee of the group.

As soon as the GSG was formed, the influence that was wielded by 'Friends of Democracy for Jonathan' was eventually whittled down as the unfettered access to the President hitherto enjoyed by them was drastically reduced as the Chief of Staff who coordinates the schedules of the President made things tough for the Abba-Aji led group in order to pave way for the new group which he empowered.

To further achieve the set goal of ensuring that only the GSG remains the Coordinating group for all the associations, the Minister of the Federal Capital Territory, Senator Bala Mohammed, the head of Senators that championed the emergence of Goodluck Jonathan as Acting President and later President, was drafted in to give support.

The 'Friends of Democracy' before its disintegration following the appointment of Senator Tafida as Director General of the Jonathan/Sambo Organization was mainly populated by politicians that could aptly be described as supporters of 'any government in power'. Among them are former Deputy Senate President, Ibrahim Mantu, former FCT Minister of State, Mr. Solomon Ewuga, former member of the House of Representatives, Hon. Emmanuel Arigbe-Osula, Chairman of the House of Representatives Committee on Business and Rules, Hon. Bassy Ita-Enag, Deputy Governor of Kogi State, Mr. Philip Salau amongst others.

Expectedly, the attempted move by the political jobbers to scheme out one another for positions was the same stroke that eventually nailed them, as it was gathered that President Jonathan felt that appointing one of them to lead the campaign may become counterproductive. The President is said to have fears that the actors may most likely engage one another more with how to take over the leadership of the group as against prosecuting the campaign proper.

The campaign of calumny, it was gathered climaxed when some Directors reportedly complained to President Jonathan that having been involved in the controversy over the letter that was supposed to have been transmitted to the National Assembly by late President Umaru Yar'Adua, he (Abba-Aji) cannot be trusted to lead any pro-Jonathan campaign group.

Similarly, Alhaji Gulak who was the National Coordinator of the Goodluck Support Group was considered to be politically inexperienced and out of the political scene for too long a time to make a difference in mobilizing support particularly in the North.

It was gathered that the fall out of the scheming and counter scheming by the Directors of the different Organizations led President Jonathan to settle for the choice of a neutral person and when the decision was eventually taken, the lot fell on the Nigerian High Commissioner to the United Kingdom, Senator Dalhatu Sarki Tafida who was not part of any of the associations on ground.

Immediately after the appointment of Tafida, some of the associations particularly the Friends of Democracy for Jonathan led by Abba-Aji and Goodluck Support Group led by Gulak and Alhaji Sambawa made spirited effort to reject the appointment of the Nigeria High Commission to United Kingdom. The rejection was based on the premise that Tafida is not grounded politically and would be difficult to market Jonathan to Nigerians particularly Northerners that have no regard for him owing to his political antecedent.

However, when the two major support groups with some power brokers in Aso Rock and beyond were engaged in underground moves to get the appointment of Tafida reversed, other groups led by Goodluck Na Kowa not only endorsed the appointment but mobilized support for its acceptance.

By such move, the coalition by Kowa succeeded in making nonsense of the two major support groups whose ultimate desire from the beginning was to superintend over all the other groups.

It was also gathered that the main funds that got to the groups were from state governors sympathetic to President Jonathan but most of the associations wrote to several government agencies asking for financial support. While all the behind-the-scene scheming were going on before the appointment of Tafida, a new and strong association with the name; 'Goodluck Na Kowa' believed to have the active support of the First Lady, Dame Patience Jonathan emerged with a clear focus and vision to genuinely pursue the emergence of President Jonathan as the PDP Presidential candidate and subsequent election in April 2011. The group with headquarters in Jabi District of Abuja remains one of the only active groups out of the over 1,800 that hitherto sprang up.

Investigation revealed that most of the groups folded up as their anticipation of funding was shattered with the appointment of Tafida who was also one of the former chief campaigners and proponents of the 3rd term project of former President Olusegun Obasanjo as the Coordinator of the umbrella Organization of all the campaign organization. Since the arrival from London and resumption of Tafida as Director General, most of the other organizations have either been subsumed into the main campaign structure or have folded up to join other presidential aspirants.

While most of the Organizations are folding up, the Goodluck Na Kowa group led by Dr. Jhalil Tafawa Balewa as National Chairman and Alhaji Mohammed Abdullahi as National Secretary are expanding their frontiers and forging ahead with their campaigns as the group recently inaugurated the FCT, South East, North Central and North West chapters of the association as well as concluding plans to do same in the South-South and North East zones of the group.

National Secretary of the group, Alhaji Abdullahi said in a chat that the group which meets every Thursday at Park in Abuja, is determined to carry out its vision by focusing on the real PDP delegates saying that its members are presently engaged in a one-on-one campaign with PDP members in the states.

One of the first groups to get subsumed into the Jonathan/Sambo Campaign Organization was the Goodluck Support Group whose National Coordinator, Alhaji Gulak and another national coordinating member, Alhaji Sambawa were appointed Directors. Since the appointment of the two, the headquarters of the group situated in Area 11 of Garki district which used to be a beehive of activities has become a ghost house for rats, wall geckos and cockroaches as attention is now directed at the main campaign headquarters headed by Tafida.

Similarly, the Friends of Democracy for Jonathan that was operating from the office of the Special Adviser to the President on National Assembly Matters, Abba-Aji, has equally lost steam and closed shop as political supporters and other jobbers have since disappeared from visiting the office for any kind of gathering or meeting. Some of the members feel having been used and dumped like sack of rotten potatoes that are no longer useful owing to decay.

In the same vein, 'Say Yes for Jonathan' which took over the rent of a magnificent building in Utako District of Abuja remains only in name as only banners and flags adorn the office.