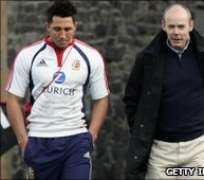 Wales' Gavin Henson could be a contender for the 2013 Lions tour to Australia, says Scotland and British & Irish Lions legend Andy Irvine.

But Irvine, who will manage the tour, warned that Henson would need to prove that he is fully committed to rugby.

“He really needs to get his head sorted out and get into physical shape because he's been out of the game for a long time now,” Irvine told BBC Sport Wales.

“If he gets sorted he could potentially come into the reckoning again.”

Henson, a Grand Slam winner in 2005 and 2008, was a Lions Test player on the 2005 tour of New Zealand.    He really has to show he seriously means business and that rugby is his first priority

Andy Irvine on Henson
But the 28-year-old has not played since March 2009 because of injuries and private life problems.

“He really has to show he seriously means business and that rugby is his first priority.”

Bridgend-man Henson joined English Premiership side Saracens from the Ospreys in October, but his debut for the London club has been delayed by his participation in entertainment programme Strictly Come Dancing.

Even if Henson reaches the BBC show's final on the weekend of 18-19 December, he will not be available to return to top-flight action until Boxing Day when Saracens face Wasps at Wembley Stadium.

The player is not registered for Saracens' pre-Christmas Heineken Cup games against French side Racing Metro.

However, should he be voted off on the weekends of either 4-5 or 11-12 December, Saracens could re-introduce Henson to rugby when their A team face Harlequins on 13 December.

At the end of Wales' disappointing November Test series, coach Warren Gatland again indicated his desire to welcome Henson back into the international arena, with the player since suggesting that his country's poor form in the autumn could boost his chances of a recall.

Former full-back Irvine says that Wales should not be too disheartened by their winless autumn series, though, and he expects them to be a force in the 2011 Six Nations.

“In fairness to Wales they weren't humiliated in any of the games,” he said.

“They gave a good account of themselves against the All Blacks and didn't do badly against Australia and South Africa.

“They've got injury problems as well, so I wouldn't say things are desperate in Wales.

“I wouldn't be too surprised if they're competitive in the Six Nations.”