KOREAN PENINSULA : CLOSER TO THE BRINK OF WAR ? 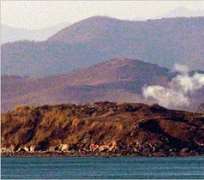 Posted by The Himalayan Voice:
* In more subdued language, China also warned against “any military acts in our exclusive economic zone without permission,” the state-run Xinhua news agency reported Friday. It was not clear on Friday precisely where the exercises would be held or whether American vessels would enter the zone, an area up to 200 miles off a country's coast.

* As an American aircraft carrier steamed toward the Yellow Sea for joint exercises with South Korea, the North's state-run media warned that the maneuvers could push the Korean Peninsula closer to “the brink of war,” while China also raised objections.

Smoke is seen rising from North Korean territory on Friday,after an explosion was heard and seen from South Korea's Yeonpyeong island.

SEOUL, South Korea — Tension mounted Friday near a South Korean island bombarded this week by North Korea, as the North's military again fired artillery, this time in what appeared to be a drill on its own territory.

As an American aircraft carrier steamed toward the Yellow Sea for joint exercises with South Korea, the North's state-run media warned that the maneuvers could push the Korean Peninsula closer to “the brink of war,” while China also raised objections.

South Korea, meanwhile, was struggling with domestic political fallout from Tuesday's deadly attack, which exposed the weakness of South Korean defenses and brought criticism of President Lee Myung-bak for failing to retaliate more forcefully. On Friday, he appointed a new defense minister, whose predecessor resigned Thursday for failing to keep forces ready in an area that has been the site of repeated military clashes with North Korea.

North Korea's state-run news agency lashed out at plans for the South Korean-American training exercise on Sunday in waters near the island. In characteristically bellicose language, the Korean Central News Agency said that the North's army was “getting ready to give a shower of dreadful fire and blow up the bulwark of the enemies.”

“The situation on the Korean Peninsula is inching closer to the brink of war due to the reckless plan of those trigger-happy elements to stage war exercises targeted against” the North, the dispatch warned.

In more subdued language, China also warned against “any military acts in our exclusive economic zone without permission,” the state-run Xinhua news agency reported Friday. It was not clear on Friday precisely where the exercises would be held or whether American vessels would enter the zone, an area up to 200 miles off a country's coast.

The West had hoped China would use its leverage as the North's traditional ally to press it to refrain from further attacks, and the Chinese statement on Friday failed even to criticize the North for carrying out the attack on Tuesday, which killed four people including the first South Korean civilians killed by the North since the 1950-53 Korean War.

But the Chinese statement was less forceful and direct than previous warnings against American maneuvers off its shores, and China appeared to be more focused on mediating the dispute to head off further violence. Foreign Minister Yang Jiechi met with the North Korean ambassador on Friday and spoke by phone with his South Korean and American counterparts.

Mr. Yang said China was “very concerned” about the situation, saying “The pressing task now is to put the situation under control and prevent a recurrence of similar incidents,” Xinhua reported.

In addition to sending the aircraft carrier George Washington to the region, the United States made another show of solidarity with the South on Friday when the commander of American forces in South Korea, Gen. Walter L. Sharp, visited Yeonpyeong Island to survey the damage from the hour-long bombardment, which killed two civilians and two marines.

But North Korea remained defiant, firing off artillery rounds right after the general's visit. The rounds did not fall in South Korean territory but rattled nerves on the island nonetheless.

A spokesman for the South Korean Defense Ministry, Kwon Ki-hyeon, said the shots appeared to stay within North Korean territory, suggesting they were part of a drill or perhaps an effort to spook the South Korean garrison on the island, which lies within sight of the North Korean mainland.

News flashes about the new artillery fire set off a brief wave of alarm in Seoul, where Tuesday's attack has stirred anxiety and outrage. Local television here has been inundated with images of the damage to the island's once sleepy fishing town, where rows of homes had collapsed or been blackened by fire.

Most of the island's 1,600 civilian residents have fled, leaving only a few dozen mostly elderly hold-outs, some of whom where shown scurrying into bomb shelters when the artillery was heard Friday. They told local TV stations that the barrage on Tuesday turned the town into a “sea of fire,” sending stunned and panicked residents running into the streets in confusion.

The video showed shattered furniture and scattered children's toys amid the rubble, and deserted streets whose only sign of movement was a few stray dogs. While much of the town was undamaged, the attack seemed aimed at important civilian structures such as a supermarket and post office, the reports said.

The scenes of civilian destruction and of the mothers of the dead civilians wailing at their funerals have driven home the threat posed by the North to a greater extent than previous provocations, like the sinking of a South Korean warship in March, which involved only military casualties.

Many of the some 180 rounds shot by the North during the hour-long attack struck Yeonpyeong's garrison of 1,000 South Korean marines, who are dug in around the island in concrete bunkers and machine-gun nests. Local TV showed photos taken during the barrage in which fortified bunkers were engulfed in fireballs and pockmarked by exploding shrapnel.

The renewed shooting and stern warning by the North on Friday have raised concerns here that the North could respond violently to the naval exercises on Sunday. The north also issued a warning hours before the artillery barrage on Tuesday, which the North said was in response to a South Korean military drill near the island earlier that day.

While reading the North's intentions can be a challenge, experts said the report on Friday was more vaguely worded, suggesting that it may have been a broad warning to the United States and South Korea not to stray too closely to North Korean territory.

“It is a message that North Korea will not yield if it believes the joint military training infringes on its sovereignty,” said Kim Keun-shik, a professor of international relations at Kyungnam University.

The South Korean government has come under intense criticism domestically for an inadequate retaliation for Tuesday's attack. South Korean officials said their forces were unable to fully respond because they had been trained and equipped to thwart an amphibious assault, not a prolonged artillery bombardment. Only three of the garrison's half dozen 155-millimeter cannons were able to shoot back, officials said.

Stung by the criticism, the South Korean president, Mr. Lee, has ordered reinforcements to Yeonpyeong and four nearby islands, as well as more heavy weapons.