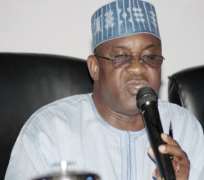 ABUJA, Nov 23, (THEWILL) - The controversial Electoral Act would be subject to public scrutiny at a public hearing to be organised by the Senate this Thursday according to an announcement by the Senate.

Senate's spokesman, Senator Ayogu Eze, told a press conference in Abuja at the end of the plenary session that preparation for the public hearing is in top gear.

"If possible they may eliminate the time that would have been wasted on setting up a conference committee. Everything is being done to ensure that that matter is treated speedily," he said.

According to him, the public hearing is most apt and necessary in the circumstance.

"The Senate President said, we are listening National Assembly, we represent people, at the end of the day what will happen is what the Nigerian people desire and what will be in the overall interest of our democracy. That is what will guide our actions. We want to assure you we have taken on board all the views and even those that will be express in the public hearing," he added.

Speaking on the 2011 budget, Senator Eze said the budget is yet to get to the Senate.

"I want to assure you that we have not received the budget and when they will submit it, the person who will have the idea will either be the Minister of Finance, the DG Budget or may be the spokesman of government, Minister of Information or the Special Adviser to the President on Media and Publicity. They are the ones who might be able to speak but right now we do not have facts on when they are coming, I can tell you that," Eze added.