HE HIDES OR LOCKS HIS PHONE â€“ RONKE OSHODI OKE 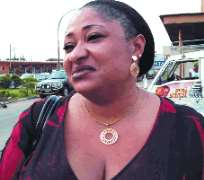 Ronke
You would expect these Nollywood big names to know a thing or two about cheating men. After all they have at one time or the other in their careers featured in movies where a man played the role of a cheating husband. They have also known about a friend or relation whose husband once cheated on her.

Besides, they have certainly had to give advice to a friend on this issue of men cheating on their spouses. In the recent past, they spoke to us, their ardent fans, from the TV screen and now they are talk direct from your favourite Sunday-Sunday tonic, EXPLORE. Enjoy, lick up the juice! Happy reading!!

FUNKE AKINDELE
How do you know your partner is cheating on you?
When he doesn't call regularly and he is not too available, and what else? You will know now, that is the major thing.

What if he is as busy as I am; he might not be available all the time?

But he will call you; you know when a man is devoted and in love with you he will always want to talk with you, send BBM (Blackberry message) to you no matter how busy he is, he will want to take you out but when he is cheating on you he will want to spend more time with the other person and talk more with the other person than you so you get to know with that and even when you argue, when you complain he will just be quiet because he knows he's in love with someone else.

But there are some men who will know how to play their game well?

(Cuts in) But there are men that won't show any signs of change, they just love you and they are still playing some 'away' games?

Yes, some 'away' games; it's normal for men to do that; that's their style, sorry, I don't mean to abuse them. When they are giving the other woman attention, maybe the love; maybe I should just put it this way - if he's in love with somebody else, you will see less of him and he will not call you regularly but if he's cheating on you, you might not know because he might just be cheating on you because he wants to be a man, you understand, and still be in love with you, so if he is no longer in love with you, he will spend less time with you.

But some cheating guys tell lies very well and they can leave their phones?

Anytime their girlfriends call on the phone, they are not always too comfortable to answer it where you are. You will just see that they are fidgeting, that they can't talk well and all that. So if you are smart you will know.

So if it is a woman that is cheating how will the man know?

It is the same thing. When her hair is not bad, she will say she is going to the salon to do it, and then go and see her boyfriend.

Ronke 'Oshodi Oke'
How will you know if your partner is cheating?
Nowadays, men don't really know how to manage having affair out of wedlock and their home, so it won't show. If men want to do some kind of tricky stuff they will start hiding their phones or locking it with a password; of course you will know, you might have been together for a while so if anything is going on, you know through his attitude.

But there are people who lock their phones that don't cheat?

No, that is not what I am saying, I didn't say using private call as in having secret lock and stuff like that; what I mean is that they won't let their wives touch their phones. For instance, if I want to take my spouse's phone, and maybe he has locked it with a password, if he is not hiding something, why can't he leave it open?

But a GSM handset should be private; as a person, I don't leave my phone open me?

But I don't check my wife's phone?
If I want to use my husband's phone I will have to call him that I want to use his phone; to me it is not a good thing. We are supposed to be one; we are one so I can use your phone and you can use mine as well; what if I run out of credit (airtime) and I want to use your phone so I will have to call you that I want to do this, I want to do that? It's not really worth it you will know. Everybody has his or her own weak points. Some guys will say there is no network in the house, let me go out and receive. Here is somebody that has been receiving phone calls in the past and all of a sudden the network just goes like that so for me that is how I'm going to know.

By dodging his phone?
Even through his attitude, I will know; for instance, by coming home late,

Some men can hold all of these together without anything showing?

Something will definitely change; he's my husband, isn't he? When you say someone is your husband, he's your spouse; you might have lived together for a long time. So, you will know when he's into any dirty game. There are some attitudes you can't explain, I will know something fishy is happening, certainly I will know that something is wrong somehow, no matter how perfect you are.

That thing will have to be a woman?
Yeah, most time it might be a woman. You know men will always have this itch and they will say, let me just try this and see whether it works. So, at times, they may not want to tell their spouse, because they might be scared or something.

OMONI OBOLI
If your partner is cheating, how will you know?
I think if he's not showing the kind of affection he used to show or maybe when he starts coming home later than he used to and he suddenly has excuses that he didn't use to have before. I think those are ways to tell if something is going wrong. Also, when he starts spending more than he used to spend before and cannot account for it when you ask him, then there's a problem somewhere.

But some people can still show the same affection, do all the things they used to do at home, yet they are playing the 'away game'

Even if he's showing you the same amount of affection that he used to show you, the other things I mentioned like him coming home later than he used to because he must spend time with the girl. So, if he's supposed to close by 5 pm at work and come home at 6 but now comes home at 8 and when you ask him, he doesn't have any concrete answer or the answer does not sound genuine, then you should know something is wrong. Plus, if he's spending much more than he used to or supposed to spend and he doesn't have account for the money and how he spent it, then something is wrong.