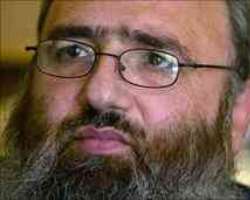 The radical Muslim cleric, Omar Bakri Muhammad, has been sentenced to life in prison by a military court in Lebanon.

He told the BBC from his home in Tripoli that he had been informed by his lawyer of the verdict on Thursday.

He had been tried in his absence by the court, accused of forming a militant group with the purpose of weakening the Lebanese government. He strenuously denied the accusation.

Lebanese officials have confirmed the sentence, but he has not been arrested.

Bakri Muhammad, who was born in Syria and also holds Lebanese nationality, has been told he has 15 days to appeal.

He was among 54 people sentenced, to varying terms of imprisonment, the officials said. About half are already in prison.

Bakri Mohammad told the BBC he had never been informed about the case or asked to attend the court.

“I have never received any notifications, not even a warrant of arrest – everything was in my absence,” he said.

“When I heard about [the trial] one and a half years ago, I did contact many officers, many people in the securities, in the army… and they said, 'If you do not receive a warrant of arrest officially, do not worry.'

“So now I am receiving a sentence for life for a crime I never committed.”

Exclusion
Bakri Muhammad lived in the UK for nearly 20 years after seeking political asylum in 1986 and being granted indefinite leave to remain.

“Disbanded” al-Muhajiroun in 2004
Suddenly left UK for Lebanon in August 2005; barred from returning by Home Office

The self-styled “sheikh” ran the radical Islamist group, al-Muhajiroun, from north London until it was disbanded in 2004.

After the July 2005 London bombings, he caused a media storm when he declared that the only people he blamed were the British government and public.

The next month, Bakri Muhammad left the UK on what he described as a holiday to see his mother in Beirut.

While abroad, the British government used existing powers to exclude him, saying his presence was “not conducive to the public good”.

The decision did not affect his family, including his seven children.

At the time, Bakri Muhammad said he had never preached violence, and had run a “purely ideological, political campaign” in the UK.

But he also vowed that he would never return the UK because of the “evil policies adopted by the British Government”.