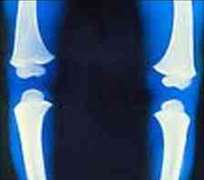 Coloured X-Ray of the legs of a child with rickets

Consultant orthopaedic surgeon Prof Nicholas Clarke checked more than 200 of the city's children for bone problems caused by a lack of vitamin D.

He was astonished by the results, which, he said, were “very reminiscent of 17th Century England”.

He said vitamin D supplements should be more widely adopted to halt the rise in cases.

The crippling bone disease can lead to deformities like bowed legs as well stunted growth and general ill-health.

A lack of vitamin D can be caused by poor diets and insufficient exposure to sunlight, which helps the body synthesise the vitamin.

Prof Clarke said: “A lot of the children we have seen have got low vitamin D and require treatment.

'Middle class and leafy'
“In my 22 years at Southampton General Hospital, this is a completely new occurrence in the south that has evolved over the last 12 to 24 months and we are seeing cases across the board, from areas of deprivation up to the middle classes.

“There is a real need to get national attention focused on the dangers this presents.”

He added that the “modern lifestyle, which involves a lack of exposure to sunlight, but also covering up in sunshine” had contributed to the problem.

“The return of rickets in northern parts of the UK came as a surprise, despite the colder climate and lower levels of sunshine in the north, but what has developed in Southampton is quite astonishing,” said Prof Clarke.

“We are facing the daunting prospect of an area like Southampton, where it is high income, middle class and leafy in its surroundings, seeing increasing numbers of children with rickets, which would have been inconceivable only a year or so ago.”