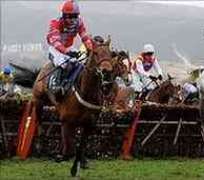 JCB is backing races at Cheltenham over the next two years

The firm has renewed its backing of the Grade 1 JCB Triumph Hurdle for the 10th and 11th year, with the next version of the race being run on 18 March, 2011, as part of the Cheltenham Festival.

And there will be three new juvenile hurdle races as part of JCB's jump racing sponsorship portfolio.

The Gloucestershire course said the JCB deal made “enormous sense”.

These will each be run over routes of about two miles at three major Cheltenham fixtures in November, December and January.

Mr McNeile, director of sponsorship at Cheltenham Racecourse, said JCB had been a “terrific partner” over the past decade.

“I'm sure that the JCB brand will gain even greater exposure this season, given the number and the profile of races under its banner,” he added.