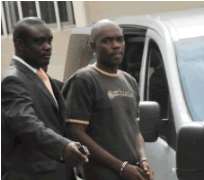 Okah (right)
Former leader of the Movement for the Emancipation of Niger Delta (MEND), Henry Okah, arrested on terror charges after bombings in Abuja on Independence Day said yesterday that a man identified as the mastermind of the attack is also living in South Africa.

Okah, who denied the terror charges, spoke of the suspect in an affidavit submitted in court during a bail hearing yesterday. Okah said police misidentified one of the suspects as Chima Orlu. He said he knew the man as Justin Malcolm Umejesi and that he provided accommodation to Umejesi in Johannesburg after they became friends.

He said he believed Umejesi took advantage of his hospitality to spy on him for the Federal Government. 'I have an interesting history with this person,' Okah said in an affidavit. Okah said after he caught Umejesi taking photographs of people in his house, he determined Umejesi was reporting to the Nigerian consulate in South Africa. Okah said he ended their friendship in April 2007, and that Umejesi did not deny spying when confronted.

The Associated Press quoted Azuka Okah, the wife of Henry Okah as saying that she recognized the picture of one of the alleged masterminds in a Nigerian newspaper and originally pointed it out to her husband. Police had published the names and photos of two suspected masterminds of the bombings in Osun Defender newspaper.

As at press time, reports said Nigeria's foreign ministry could not be reached for comment. South African police did not respond to queries about whether they were searching for Umejesi. Nigerian police say they had no information about Orlu using another name or living in South Africa.

The court would decide on Tuesday whether to grant bail to Okah. Magistrate Hein Louw scheduled his ruling for November 9 after lawyers presented their closing arguments yesterday in the three-week-old bail hearing.