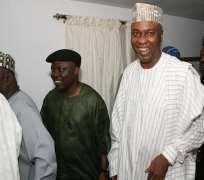 San Francisco, Nov 03, (THEWILL) – Nigerian powerful and influential state governors late Wednesday night asked Kwara State Governor, Dr. Bukola Saraki to continue in office as Chairman of the Nigeria Governors’ Forum (NGF) pending when a six-member committee it set up submits a report to it on the modalities for the election of a new Chairman.

Recall that last week, some Peoples Democratic Party (PDP) Governors met and selected Ogun State Governor Gbenga Daniel as a replacement for Saraki who is contesting in next year’s presidential election.

But the move was greeted with uproar and criticism from some members including Saraki who said the process that chose his purported replacement did not follow due process and forum guidelines.

Saraki had earlier intimated the forum of his planned resignation as Chairman of the following his interest in the presidential race.

THEWILL gathered that the communiqué read to journalists after the meeting recognized Saraki as its Chairman.

The communiqué: “The forum formally welcomed the new governor of Ekiti State, Dr. Kayode Fayemi. Following the chairman's briefing and after exhaustive discussion around the issue of leadership, the forum resolved that there was no change in the leadership of the forum. Members resolved that for now the chairman will continue.

“Those members who were involved in the purported meeting that took place regretted their action and the forum accepted their apology.

“The forum also agreed to set up a committee of six members headed by the Governor of Lagos State to look into issues of succession, tenure of chairman, transition arrangements etc. Other members of the committee are the governors of Niger, Sokoto, Borno and Enugu states.

“Members deliberated on security challenges in the country and condoled Mr. President for the October 1 2010 bomb blasts. They also condemned in very strong term any act of terrorism and violence.

“Members commended the security agencies for their swift response and reiterated a commitment to increase security surveillance in all states.

“Members also condoled with their colleague, Governor Imoke of Cross River State over the loss of his mother.”