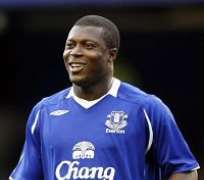 Aiyegbeni
Yakubu Aiyegbeni has set his sights on European qualification after firing Everton to victory over Stoke on Saturday. The Nigerian striker scored his first goal since April to secure a 1-0 triumph and maintain the Toffees' revival.

Everton has climbed to eighth position on the back of a 5-match unbeaten run and Yakubu feels they can go even higher. 'It is not going to be easy but we want to play in Europe next season,' he said.

'Hopefully, we will start doing the right thing on the pitch and we will get into Europe – but there is still a long way to go.' Yakubu admits it was a relief to end his goal drought but insists he is now feeling in peak condition after being plagued by injuries throughout his time at Everton.

'As a striker, sometimes you have good chances and you don't take them, but I was there at the right time and took it really good,' he explained.

'It is really good to score goals. It had been six or seven games and I hadn't scored, so to get a goal will give me more confidence and I am going to score goals.

'I think my fitness is really good, better than last season.

'Hopefully, I can score goals and help the team, and the team can achieve something this season.'

Jermaine Beckford is taking time to settle following his summer move from Leeds while last season's top scorer Louis Saha is only just feeling his way back into action after almost two months out injured.

But with the return of Saha, Yakubu feels competition in the squad is growing and that will only help him.

'It is always like that playing for Everton,' said Yakubu, who hit 21 goals in his first season at the club following his £11.25million move from Middlesbrough in 2007. 'You have to fight for your place and whenever you get the chance, you have to take it.

'It has been really great, but we will fight together and work as a team. 'We knew when we were at the bottom we were not under pressure because we had good players and we could turn things around.

'We have done it already and we don't want to stop.'