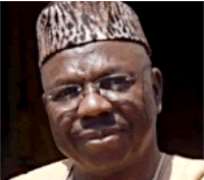 Nigeria's High Commissioner to Canada, Prof. Iyorwuese Hagher, has described as most tragic, the fact that elections in Nigeria are not considered as a game of democracy with a set time line. He also spoke on other salient national issues to Daily Sun.

Excerpts:
Credible elections in 2011
The most tragic thing about polls in Nigeria is the fact that they are not considered as a game of democracy with a set time line and the mediation is public good. If we knew that after four years as guaranteed by our Constitution, the person who didn't win election can wait and still run and yet have a chance of running again with the incumbent and winning, there will be greater peace.

If elections were not wars because at the end of every nomination and election, no matter how many votes a loser garners, it is the winner, who takes everything, these are bad aspects of the Constitution we operate. The other dimension is that the presidential system is very expensive and it immediately excludes those who do not have a deep pocket from contesting for certain positions. There are structural problems already that narrow our choices of people who become our leaders.

My advice to the leaders is they should dialogue. It is not unusual that if consensus candidates emerge. For instance, in certain states like mine (Benue), if the present Governor (Gabriel Suswam) contests without any other contestant, the chances are that there will be less money released for campaigns. The same thing with other states too if they are good enough. If they are not good enough, of course, the opposition could also have a single candidate if they agreed upon, this will make the contest more interesting.

The end result is the elite and the leaders are looking at positions not as service, but as an investment. As businessmen, they are busy plotting. It is easier to possess a government and a treasury than to invest in Nigerian stock or to put your money in the bank. These are certain distortions that have made me to be very afraid of the 2011 elections.

Make or mar
But significantly, these elections will make or mar Nigeria because the international community is impatient with the slow pace of democratic process in our country. Nigeria should be leading  and providing a proper template of leadership for the rest of Africa. Sadly being the largest Black race, the rest of the other people of the Black race including the Black in the Diaspora are impatient and angry with the state in which our government and our institutions are.

Weak laws, weak institutions
Our country is characterized by weak institutions and weak laws. We do not deserve this and all of us collectively have a responsibility to ensure that Nigeria moves out of this mood. I pray that God will give us the heart and humility to understand that democracy is about a people having the ability to elect the leaders they want. The process should be such that one person, one vote is guaranteed at the ballot box. Votes should be counted at the ballot box, tallied and announced; and subsequently our election should become more transparent. Any form of lack of transparency will show up certain forces in our country that would worsen our image.

My understanding of zoning
I suppose when you talk about misnomer or you talk about the federal character, you are actually talking about the zoning system in the Peoples Democratic Party (PDP) I come from an area that wrote zoning into the NPN and advocated for zoning in the PDP. Basically, zoning is a very good thing. When it guarantees that every zone is given representation in how the country is governed and this is a normal thing within a federation, all federations do this in the world.

On whether the present system guarantees the kind of noise that is going about on zoning or appropriately reflected in the system and the thought of those who made the zone or made zoning the essential feature of a political party, it's another matter altogether. I believe that the late President Yar Adua was elected on the basis of zoning. Having been such chosen, that election had within it a process where he and his Vice President (Jonathan then) run on the same ticket. It is to me a proper thing that the President who took over constitutionally should conclusively move on the basis for which they were elected and if it was that particular zone was given two terms, then it is proper that he should complete it.

I believe that if one person who was elected on one zoning arrangement dies while in office. It is guaranteed by the constitution that the process provides for the other part of the ticket to continue. So I have no reason whatsoever to doubt in my mind that zoning is fully in place.

Why we proposed zoning
When we proposed zoning, I had the privilege of pondering over this matter for a very long time. It seems that the country will evolve to a state when we will not stop having zones but we will no longer need to have to zone the presidency. Time would come when we will pull everybody together and say let the best emerge from the country. But while we are building this state, consensus to evolve a nation state and sense of national identity for all of us, let's have some consensus at least within one party that once the position is zoned, all the other positions are zoned in relative to that. It is not something that any country in any federation can afford to dismiss easily.

Bad governance
No, I was only talking about the individual character of those in government. There are two types of people who are vying for political positions in the country today. One group believes that politics is an investment and that when you put a little money into politics and you win a political position, then you collect every single dividend for yourself, your family and your friends.

They think that politics is about taking spoils there is so much money that government gives, so we might as well take. If chosen in a political party and one comes to power, that gives us the right to have the resources of the nation as our nation. That is if I am a president I appropriate the resources, I am the nation, if I am the governor of a state, the governor is no longer an entity separate from the state. This is a classical case of bad governance.

Capacity to do good
The second category of people who go into governance, into political positions, who vie for political power, believe that politics is the capacity to do good, the capacity to serve rather than to have, is the major difference. When you serve, who are you serving? We are serving the majority of the Nigerian people, who do not have access to where national wealth is being shared. Who also need to be given good roads, to have security.  Who need to have their children educated in good educational system. Who need to have good health and all the things that democracy and good governance entails.

The electorate should be able to say that this person's character warrants his coming in. We want somebody who will share resources across the board, and then you vote somebody and he is sharing with himself alone, or with his parents or with his wife or kids, you have no complaint because that is the person you chose and whom you elected if elections are fair.

However, if you choose somebody who wants to serve, and direct resources to ameliorate the suffering of the downtrodden, the oppressed people, those who have presence but cannot express their presence to those who are clinging to the emergence of the society which is the majority of our people, then we should be given the right to elect such capable people.