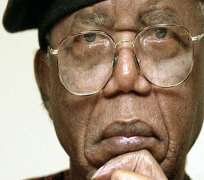 Two years ago, I drove from my home in central Connecticut to the quiescent country precincts of Annandale-on-Hudson to visit author Chinua Achebe, whose novel Things Fall Apart was enjoying a cheery 50th anniversary. â€¨

Achebe's self-effacing, soft-spoken personality is in ironic contrast with the exuberant celebration that erupted around his first – and most widely read and translated – novel. I was in Achebe's home to coax him to look back on 50 years of his book's extraordinary journey. Achebe stated that I was one of perhaps more than a hundred interviewers he'd hosted that year. Even so, I dared convince myself that there was something special about my interview with him.

Let me explain. I had interviewed Achebe several times in the past – first in 1983, when I was a rookie correspondent for the now defunct African Concord, the last time in 1987, shortly after the publication of his latest novel, Anthills of the Savannah. That first interview set a mood for my relationship with the author; he saved my career. â€¨

I met Achebe by serendipity. It was 1983 and I had just graduated from college. Visiting Ogidi, his hometown, to see my girlfriend at the time, I raved and raved about Achebe and Things Fall Apart. The girl listened for a while, a bemused smile creasing her cheeks. Then she said: "Achebe is my uncle. His house is a short walk away. He happens to be home this weekend. Do you want to visit him?" â€¨Did I ever! â€¨â€¨

The Achebe I met in his country home personified grace. I still remember that he served us cookies and chilled Coke. He regarded me with penetrating eyes as I gushed about his novels, his short stories, his essays, even reciting favorite lines. I told him I had just got a job with the Concord and would be honored to interview him. He gave me his telephone number at Nsukka, the university town where he lived and ran the Institute of African Studies. â€¨A week later I flew to Lagos, reported for work, and told the weekly magazine's editor that I had Achebe's telephone number – and a standing commitment that he would give me an interview. Elated, the editor dispatched me on the assignment. It was my first real task as a correspondent. â€¨â€¨

Achebe and I retreated to his book-lined office at the institute, its air flavored with the scent of books stretching and heaving. Five minutes into the interview I paused and rewound the tape. The recording sounded fine and our interview continued for another two hours. Afterwards Achebe told me it was one of the most exhaustive interviews he'd ever done. I took leave of him and, heady with excitement, took a cab to the local bus stop where I paid the fare for a bus headed for Enugu – the state capital where I had booked a hotel.

That evening several of my friends gathered in my hotel room. They asked questions about Achebe, and then said they wanted to hear his voice. Happy to oblige them, I fetched the tape recorder and pressed its play button. We waited – not a word! I put in two other tapes, the same futile result. How was I going to explain this mishap to my editor who had scheduled the interview as a forthcoming cover? â€¨

I phoned Achebe’s home in panic. In a desperate tone I begged that he let me return the next day for a short retake. "Thirty minutes – even twenty – would do," I pleaded. I half-expected him to scold me for lack of professional fastidiousness and hang up, leaving me to stew in my distress. Instead he calmly explained that he had commitments for the next day. If I could return the day after, he'd be delighted to grant me another interview. And he gave me permission to make the next session as elaborate as the first.

Two days later we were back in his office for my second chance. This time I paused every few minutes to check on the equipment. I stretched the interview to an hour-and-a-half before guilt – mixed with gratitude – compelled me to stop. It was not as exhaustive as the first outing, nor did it have the spontaneity of our first interview, but it gave me – and the readers of the magazine – a prized harvest. My friends got a chance to savor Achebe's voice, with its mix of faint lisps and accentuated locutions. â€¨

That interview happened more than twenty-five years ago. It’s been followed by several other encounters with Achebe, but it still stands out. I had admired the man from a distance, in awe of his extraordinary powers as a writer. After he saved my career, I was inspired by his uncommon generosity.

Many years later, I came into the debt of another great Nigerian writer, this time Wole Soyinka, the 1986 Nobel laureate for literature. It was October of 1997. Soyinka was in his second tour as a political exile, hounded out of Nigeria by the brutal regime of Sani Abacha, a rustic of a general who favored dark glasses, was reputed to have an insatiable appetite for spirits, young sexual partners and expensive automobiles.

Soyinka had been invited to give a series of talks at five different colleges in what's called the Pioneer Valley area of Massachusetts. I had known Soyinka from afar, even though I had interviewed him the year he won the Nobel. That night he was to speak at Hampshire College in Amherst. I had just finished the first draft of my novel Arrows of Rain, inspired in part by Soyinka's prison memoir, which contains the haunting words: "The man dies in all who keep silent in the face of tyranny."

I wanted to persuade him to read my manuscript. Yet, when I got to the venue, my nerve betrayed me. It seemed a bit selfish to burden a man like him, impossibly busy at the best of times and now wrestling with the pain of exile, with any more demands. â€¨â€¨I stood in the packed auditorium and listened to Soyinka's moving talk about the perennial tussle between power and freedom. As soon as he was done, I hastened to the podium to greet him. His eyes lit up. "Okey, you came," he said as we embraced. Then he added: "One of your professors told me you've written a fascinating manuscript. I'd like to read it."

I was amazed. He asked that I post the manuscript to him. For the next three months, I'd call him intermittently, anxious to hear what he thought. Each time he explained that he hadn't had time to look at it, but then assured me that he intended to.

Fast forward to Christmas 1997. My family and I were invited by an American family to spend the day with them, sharing lunch and dinner. There was a lot to eat and drink, but the meals were a disaster as far as I was concerned. There was no rice, no chicken, no goat – staples of any festivity in Nigeria, but especially at Christmas. As the night wore on, I told my wife that we had to leave. "This is the first Christmas in my life when I've not eaten rice. Or chicken." I knew that chicken would be too complicated to make, but not rice. My plan was to hasten to our home, then boil a few grains in order to spare myself the trauma of a first riceless Christmas.

As we walked into our house, I noticed the blinking light of the phone's voicemail. Among the messages was one from Soyinka. He had just read my novel and found it "highly evocative". That was it: I wasn't going to bother with eating my grains of rice after all. Soyinka had saved this Christmas that was marked, in my view, by culinary disaster. My wife wondered why I had decided not to boil some rice after all. "Soyinka's message is better than rice," I told her.