FAYEMI: AT LAST, THE TRIUMP OF TRUTH IN EKITI 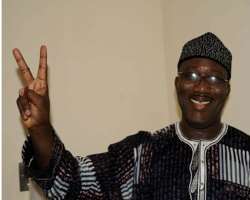 Otito lo ma leke iro Kayode mi o Ma ma yi wa pada o… Oti to lo ma leke iro Fans of Ebenezer Obey, the legendary Juju musician will immediately recognize the foregoing lines as an adaptation of the legend’s lyrics; it simply says truth will always triumph over falsehood; Kayode Fayemi, who has now been sworn in as Governor of Ekiti state after a long battle spanning 41 months, is advised to go into office resolutely committed to the principles that have brought him to this fine moment in his public career. The expectedly melodramatic end of the Fayemi-Oni electoral saga in Ekiti state is truly a triumph for democracy and the cause of justice, but it is also the story of one man’s steely determination and belief in the justness of his cause. Men of weaker resolve would long have given up. Fayemi has fought perhaps the most dramatic battle to get to any Government House in Nigeria since 1999. He deserves praise for his discipline and consistency, and faith in the rule of law.