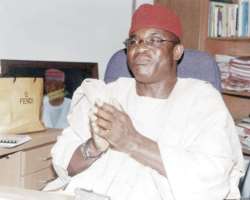 ABUJA, Oct 14, (THEWILL) - The Senate during today’s plenary condemned what it called reckless borrowing by agencies of the Federal and State governments. It said the recent borrowing by national and sub-national governments in recent times have been on the rise. This was the high point of the debate on the Debt Management office (DMO) Bill, which seeks to regulate and streamline Government borrowings.

Leading debate on the bill, which would repeal the 2008 Act, Senate Deputy Leader, Senator Victor Udoma-Egba (PDP, Cross River), recounted the serious challenge of huge debt overhang, which the civilian administration inherited in 1999 from the past military administrations. He recalled the part played by former President Olusegun Obasanjo's administration in securing a debt relief package and the eventual exit of the country from the Paris and London clubs in 2005.

Nonetheless, he expressed worry over the trend of borrowing by national and sub-national governments which was on the rise in recent times, added that “agencies of the federal government and Governors are borrowing money with reckless abandon without regard to extant laws of the land.

“Until recently, the executive did not seek approval of the National Assembly for loans as spelt out by Debt Management Office Act of 2003,'' he said.

“In other to forestall the situation of finding ourselves with huge and unsustainable debt, our laws must be strengthened to effectively regulate borrowing by governments, be it external or internal loan,'' he added.

Ndoma-Egba said the bill therefore seeks to “reposition the debt management office to effectively contain the challenges of its mandates.''

Most contributors supported the bill as they agreed that there should be a holistic system in place to regulate both internal and external borrowings.

Senator Olorunimbe Mamora (ACN, Lagos) said the borrowing was not actually the problem but that the real issue was not using such monies for the purpose for which it was taken. Mamora, who frowned at the huge debt profile of the country, however, commended Obasanjo whose determination and quest to arrest the tide took the measures he did during his tenure in office. Senator Ayogu Eze (PDP, Enugu) said while no nation could do without borrowing to bring about developmental projects to its people and state, however, urged operators of the DMO to also rise up and do what was expected of them to forestall future reckless borrowing and spending.

Senator Nkechi Nwoagu (PDP, Abia) said it was heartwarming that government had decided to strengthen the DMO but noted that “there has to be a loan data base to effectively regulate the management of the country's borrowings.''

Senator Ike Ekweremadu, who presided over the Senate, thanked Senators for their robust contributions to the debate.

He thereafter referred the bill to the Senate Committee on Foreign and Local Debt after passing its second reading to be returned to the Senate in four weeks.