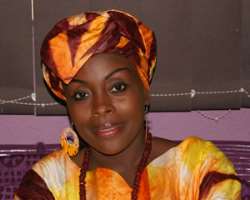 Who is Ghana's Janet jackson? in skill and in looks? Even a child on the streets will tell you its Akosua Agyepong.

Akosuas career was once with the famous NAKOREX. But, before that, Akosua Agyepong was born in Accra on the 17th of November and she is a half Ashanti, half Akyem. She started her education at Harrow International School and later attended Holy Child Secondary in Cape Coast after which she had a one year computer course at NCR.

Akosua started composing songs as a child indicating that, music was an inborn passion for her. She was subsequently discovered by legendary Nana Kwame Ampadu and subsequently came out with her first album 'Frema' which was released on January 1, 1990. The 'Frema' album had songs like 'Me ye Obaa', 'Born again', 'Anan tuo', 'San be hwe wo mba' among others.

Her second album was entitled 'Esiwa' had the hit song like 'Kokokoo'. Her third was with music group NAKOREX which was made up of herself, Nat Brew and Rex Omar. Akosua has five albums to her credit, one in collaboration with NAKOREX and another as a member of NAKOREX. The group released two albums which included the popular hit song 'Kpanlogo'. She later turned into doing gospel music.

Considering her feminine driven songs, it is not surprising she plays a very significant role in Leila Djansis' upcoming blockbuster Sinking Sands. Akosua plays the role of Mama may, a tuberculosis stricken foster mother of the main character Pabi Adulai. Akosuas' real life of caring clearly mirrors the foster mother role she plays in the film. She is extremely pivotal in the life of the orphaned Pabi, played by Ama k Abebrese.

Sinking Sands is Akosuas first movie and do we hope to see more from her? Yes. truly a Janet Janet remake, Akosua will soon become one of the most sought after thespians just as she is a sought after musician.

Akosua Agyepong is married to Rev Daniel Asamoah-Larbi and she is a mother of six, Ewurama, Ebo, Nana Akua and Maame Kwakywaa, Kweku and Efua Amoabea. She also owns a restaurant, 'Ye Kum Kom' at Rawlings Park in Accra Central.

Her versatility is proven beyond all reasonable doubt as she transforms from Madam Akosua Agyepong to Mama May in the much anticipated movie.

If you have not seen the trailer, its here