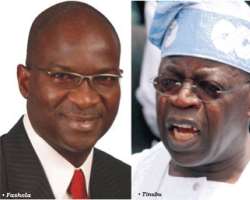 The sponsors of the True Face of Lagos (TFL) namely; ex-Commissioner for Information & Strategy, Mr. Dele Alake, his colleague in Environment, Mr. Tunji Bello, erstwhile Special Adviser on Information and Strategy, Mr. Segun Ayobolu and Daily Editor of THE NATION, Mr. Gbenga Omotoso have been identified as the forces behind the plot.

The move, which commenced midway into the administration of Governor Babatunde Raji Fashola (SAN), became manifest few weeks ago with the minor cabinet reshuffle, which edged out Chief Enock Ajiboso as the Commissioner for Agriculture and Cooperatives and Mr. Sesan Olarewaju as Special Adviser on Environment, but no reason was given for their dismissal.

THEWILL also gathered that the recent dismissal of the immediate past Managing Director/Chief Executive Officer of the State Signage and Advertising Agency (LASAA), Mr. Makanjuola Alabi and the appointment of Mr. Tunji Bello as the helmsman was part of the move.

THEWILL exclusively gathered that Tinubu had conditionally approved the second-term bid of the incumbent governor, but the Deputy Governor, Princess Adebisi Sarah Sosan would not contest as Fashola’s running mate.

In her stead, Bello, who is a staunch member of Tinubu’s inner caucus and key sponsor of the True Face of Lagos, was said to have been pencilled as the running mate of Governor Fashola in the 2011 governorship election if all things remain equal.

But the incumbent Commissioner for Environment, Dr. Muiz Banire and his colleague in the Ministry of Women Affairs and Poverty Alleviation, Princess Adejoke Orelope-Adefulire are making frantic efforts to get the slot.

It was gathered that the incumbent deputy governor is already rallying the support of traditional rulers in Awori Land in order to retain her position as the deputy governor of the state.

Currently in the state, there seem to be no end yet to the nightmare of Governor Fashola as some political forces in the circle of former Governor Tinubu are ready to undermine the executive power of the state.

The cabinet members strongly backing Governor Fashola have been boxed into irrelevance with two relieved of their positions in the State Executive Council without any reason(s).

THEWILL however gathered that the two cabinet members, who were relieved of their appointments last month, were accused of being involved anti-party activities. Both Ajiboso and Olarewaju, who defected to the Action Congress (AC) before the 2007 elections from the People’s Democratic Party (PDP), are accused of plotting for Fashola to contest the 2011 election on the platform of PDP.