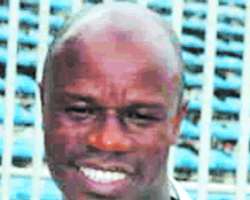 ADEPOJU
On turning the hand of the clock back to August 1997 in Conakry when Nigeria lost 0-1 to Guinea in a World Cup qualifier, fear of bowing again to the Syli Nationale gripped erstwhile Super Eagles' goal poacher, Mutiu Adepoju, who was a prominent member of the star-studded Nigerian squad then.

Adepoju, who played alongside Emmanuel Amuneke, Daniel Amokachi, and others, cautioned the Austin Eguavoen-led tutored team to be on alert, stating that the Syli Nationale of Guinea might not be easy nut to crack.

The General Manager of 3SC of Ibadan said the Eagles must avoid the mistakes of the past and approach the match with all the seriousness it might require, as defeat could cause Nigeria to resort once again to permutation on whether to qualify or not for the Nations Cup.

He advised Eguavoen to remain calm and never allow himself to be consumed in the ongoing crisis rocking the Nigeria Football Association (NFA), while assembling his squad.

'Gone are the days when teams were underrated, anybody doing that now is doing so at his own peril,' Adepoju began. 'It's true that one may be tempted to say that Guinea is no match to Nigeria, but things have changed now.

'The Eagles are no more what they used to be, that is why they must prepare for war against Syli Nationale. The match will be very tough for them. They must go to Guinea with a winning spirit, bearing in mind that any slip could be dangerous.

'Eagles must show Nigerians that they are a different team from what we saw in South Africa during the last World Cup. They must put up good performance,' Adepoju stated. 'Eagles should go to the pitch and show us that they love this country, they have to come back with a good result. All the players should be ready to give their best starting with positive response and discipline in camp.

'For my friend Eguavoen, I know him as a calm fellow. Whether the NFA is boiling or not, I know that he can handle the situation. All he needs to do is to get the boys prepared psychologically and then motivate them to give their best. He should also caution them to avoid the mistakes they made in their match against Madagascar in their first qualifier, where they played with vigour in the first half, but collapsed during the second half. That attitude almost gave the visitors an opportunity to score.

'They should not allow any dull moment while playing the match against Guinea,' he cautioned said.

Guinea is approaching the Sunday encounter with everything it has got, given the fact that her best finish in the Africa Nations Cup was second place in the 1976. The team reached the quarterfinals in three successive tournaments (2004, 2006, 2008), but has yet to make any significant impact.

However, Syli Nationale's Frenchman Coach, Michel Dussuyer, is not ready to fall to the superior power of the Nigerian side. He has named a 20-man squad for the fixture. The squad, led by Hull City's Kamil Zayatte, has only one domestic player. This, according to Adepoju, underscored the importance of the encounter to the Guineans and, therefore, he called on Eguavoen and his boys to realise that they must assert themselves in the game to remain the favourites in the group.

Syli Nationale surged 21 spots to 81st in the recent FIFA rankings, moving just in front of China PR. The team is currently in the 18th position on the continental ladder after beating Mali in a friendly and Ethiopia in AFCON qualifying. The latter was a particularly emphatic 4-1 result in Addis Ababa, with goals from Ibrahima Yattara, Oumar Kalabane, Karamoko Cisse and Kamil Zayatte giving Coach Dussuyer's side a perfect start in the run for Group B ticket. Guinea can even lay claim to topping the table ahead of Nigeria on goal difference.

The win over Ethiopia was Dussuyer's first match since he took back the side after six years away, having previously led that nation of 10 million people to the Cup of Nations' quarterfinals in 2004, which then was the country's best finish since reaching the final in 1976. Guinea also advanced to the last eight in the next two events.

Surprisingly, Syli Nationale failed to qualify for the 2010 Cup of Nations in Angola, and never looked likely to challenge for a place at the South Africa 2010 World Cup. In the preliminaries that followed both events, Guinea reached the final round after initially topping a tricky group that included Kenya, Zimbabwe and Namibia.

However, Guinea proved to be out of her depth in the next stage against Cote d'Ivoire, Burkina Faso and Malawi, taking only three points in her entire campaign.