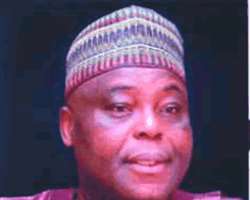 His detention is believed to be in connection with the twin bomb blast that almost marred Nigeria's Golden Jubilee independence celebrations in Abuja Friday.

According to top security sources, Dokpesi was being detained for interrogation by the security agencies following a revealing Short Message Service (SMS) text message allegedly sent to the Smartphone of one of the suspects in police custody, asking 'if Dokpesi has paid the balance,' and another SMS 'inviting another suspect to a meeting at the IBB campaign office.'

At the time of this report Dopkesi was still a guest of the SSS thereby fueling speculations that what was supposed to have been a normal invitation may be turning out to be an arrest. Daily Sun learnt that the arrest may not be unconnected with the ongoing investigations into the remote and immediate causes of the Independence Day bomb blast.

The source said, 'this was said to have sent alarm signals across the nation's security apparatus, since the suspect concerned is considered to be neck deep in the bombing plot.

'It became more dramatic when another text sent to another suspect in our custody reads: 'lets meet at IBB campaign office,' this led to what is called security circles as 'a high tech sting operation' which in a matter of hours, has netted a wider ring of suspects'.

It was also gathered that a suspect who never knew he was already under surveillance confided in a friend via a text that 'na we do am…..meet me make I brief u', is currently confessing more details to the security agencies.

Another suspect allegedly confessed that 'in the last two weeks he bought a brand new Murano SUV from funds received from Dopkesi'.

Part of the confession, according to our source, includes a directive from Mr. Henry Okah that they should destablise the government since Jonathan 'was not ready to put serious money on the table,' the security source said.

At the Daar Communications office, staffers wouldn't comment about the development. Some of the staffers who spoke to Daily Sun said it was a campaign issue and advised that only the campaign office can give any information.

Meanwhile, the IBB 2011 Campaign Organisation has flayed the detention of its Director-General 'in the strongest terms.'

The group, in a statement signed by its Deputy Director-General, Senator Mahmud Kanti Bello was a manifestation of the growing politics of intolerance, intimidation, coercion, persecution and harassment in spite of the avowed commitment to the rule of law by the present administration.'

It cautioned the security agencies of the country not to allow themselves to be used as tools to settle political scores particularly, on simple intra-party contest.

According to the statement, Dokpesi was invited on Sunday by the SSS to report to their headquarters by 11am, yesterday.

'As a law abiding citizen, he promptly complied and reported to the State Security Services headquarters by 10 a.m this morning as directed.

'Between 11 a.m and 5p.m on Monday, October 4, all telephone calls put to him were unanswered. The Campaign Organization dispatched a high -powered delegation comprising four directors of the organization and his personal lawyer to enquire as to his whereabouts. The delegation was denied access to Dokpesi and had to return to the campaign office at about 6.50pm. No reason has been given whatsoever by the State Security Services for the invitation, and detention, neither is his whereabouts known.'

The statement said at 7.50pm yesterday, Dokpesi was being denied access by the SSS to his family, personal physician, lawyers and the campaign organization.

'As we write, his family is worried, and deeply concerned for his safety, health and his wellbeing. In addition, his fundamental human rights as enshrined in the 1999 Constitution of the Federal Republic of Nigeria, are being violated. High Chief Raymond Dokpesi, is a well respected and patriotic Nigerian who has continued to contribute selflessly to the growth, development and stability of the Nigerian nation.'