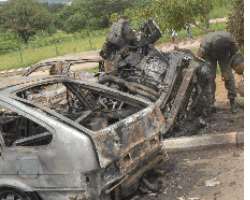 Police spokesman, Emmanuel Ojukwu in a statement, named the two suspects as Ben Jessy and Chima Orlu. He offered no further details about the two, other than warning the public that harbouring them would be a criminal offence.

'It is clear that the intention of the perpetrators of the evil act was to truncate Nigeria's celebration of half a century of her political freedom,' the statement read. 'Their motive was to cut short the joy of men and women of goodwill and to pour shame and contempt on our president and indeed the entire nation.'

Below is the full text of the statement issued by the police:

'As you are already aware, two cars exploded before noon of 1st October, 2010, while the President, Commander-in-Chief was reviewing a colourful ceremony marking Nigeria's 50th Independence Anniversary. Both explosions occurred near a bridge adjacent to the Millennium Park, within a kilometre, East end of the Eagle Square. The ugly incident resulted in the death of 10 (ten) persons, while 36 (thirty-six) others, including 11 policemen were seriously injured. The blasts completely destroyed 6 (six) cars, damaged 18 (eighteen) others, and shattered the glasses of a hotel nearby.

'The Nigeria Police deeply regrets the loss of innocent lives and the harm and damage done to the well being and property of fellow citizens. It is clear that the intention of the perpetrators of the evil act was to truncate Nigeria's celebration of half a century of her political freedom. Their motive was to cut short the joy of men and women of goodwill and to pour shame and contempt on our President and indeed the entire nation, in the very presence of dignitaries and eminent persons from around the world.

Certainly, these operators of an evil enterprise had targeted to commit mass murder of innocent children, young and old men and women, and members of the international community who had gathered to partake in our nation's glorious moment. To the glory of God, their act of wickedness was frustrated by the tight security put in place at the Eagle Square.

'Police investigation has commenced in earnest. Forensic experts are already checking about a hundred vehicles trapped in the vicinity of the blasts to ascertain the make, composition and origin of the explosives. As soon as the forensic examination is over, the vehicles will be released to their owners and the roads re-opened to normal traffic. The Nigeria Police regrets the inconveniences caused owners of those trapped vehicles and the users of those roads.

'Also, an arrest has been made by the Police in connection with the incident. Police detectives are currently hunting for another two Nigerian citizens suspected to be the masterminds of the evil plot.

'By this release, they are declared wanted by the Nigeria Police, and are hereby requested to come forward and clear their names. Any person who sees them or knows their whereabouts is requested to kindly report to the nearest Police Station anywhere in the Federation of Nigeria, or abroad, or call or send SMS to the following telephone numbers:

'Finally, I wish to call on all citizens that the thought and act of bombing any part of this country amounts to a declaration of war against Nigeria. It is our collective duty to stop criminals from destroying our fatherland. All citizens are reminded that they are obliged by the constitution to assist law enforcement agencies in the maintenance of law and order. And it is indeed a punishable offence to conceal or hide the identity or whereabouts of a wanted person.'