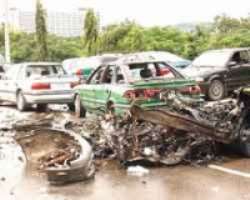 NIGERIANS expected the sky to be lit up with fireworks. But what they heard at the venue of the celebration was boom - and the sky was filled with rolls of smoke from an explosion.

It was the 50th independence anniversary of the nation turned into a tragedy. It left behind eight dead persons and several others who were injured.

But that was apparently because the security agents did not take the threat of the Movement for the Emancipation of the Niger Delta (MEND) seriously.

In a statement shortly before the explosions, MEND issued what it called bomb alert. The statement read in part:

'With due respect to all invited guests, dignitaries and attendees of the 50th independence anniversary of Nigeria being held today, Friday, October 1, 2010 at the Eagle Square Abuja, the Movement for the Emancipation of the Niger Delta  (MEND) is asking everyone to begin immediate evacuation of the entire area within the next 30 minutes. This warning expires after 10.30Hrs

'Several explosive devices have been successfully planted in and around the venue by our operatives working inside the government security services.

In evacuating the area, keep a safe distance from vehicles and trash bins.

'There is nothing worth celebrating after 50 years of failure. For 50 years, the people of the Niger Delta have had their land and resources stolen from them. The constitution before independence, which offered resource control was mutilated by illegal military governments and this injustice is yet to be addressed.' The statement was signed by Jomo Gbomo.

President Goodluck Jonathan described as wicked the bomb explosions. And he had a word for the perpetrators of the blasts: 'You know that you will be found, and you will pay dearly for this heinous crime.'

According to a statement by Presidential Spokesman, Ima Niboro, 'the

bomb explosions which occurred near the Ministry of Justice in Abuja, and which claimed several lives are a low, dirty and wicked act of desperation by criminals and murderers who do not wish Nigeria well.

Nigeria at 50, these bomb attacks are the worst anniversary gifts any nation can get.

cancelled by all means. It is sad and unfortunate. President Goodluck

Ebele Jonathan grieves with the families that have lost loved ones in the incidents. The president shares their consternation and

understands their pain, as they mourn while the nation celebrates.

'The president wants these families to know that their loved ones have not died in vain. Rather they have paid the supreme price for our unity and in their death, they have watered the tree of our freedom.

To those behind these vicious acts, the president wants you to know

that you will be found, and you will pay dearly for this heinous

The sources who preferred anonymity told The Guardian that the government had evidence that the former MEND leader, goaded by some unnamed local politicians may have mastered the blasts, which they said were meant to abort the nation's golden jubilee celebrated in style in Abuja yesterday.

According the sources, working with British Secret Service, the Nigerian authorities had got hint of the 'dastardly' plans and had quickly contacted the South African authorities to help 'put Henry Orkah out of circulation in Johanesburg where he is residing until after the celebrations in Abuja, to which some 15 heads of state were in attendance.'

'The South Africans acted on the information supplied by Nigeria and the Britons by arresting Henry Orkah. But, inexplicably, Orkah was released just in time to give instructions to his boys to act and the result of that oversight is what we are now witnessing,' the sources further alleged.

The Guardian could reach neither the South Africans nor Orka's camp for reactions as at the time of press. However, it was confirmed that Henry Orkah's home in Johanesbourg, South Africa was raided by the South African police but that he has since be let off the hook apparently for lack of evidence to hold him.

The blasts in Abuja took place at about noon when the celebration was at its peak at the Eagle Square. Eye-witness accounts said they bombs exploded between the Federal High Court and Transcorp Hotel, a few meters away from the Eagle Square venue of the event.

According to sources at the scene of the blast, two vehicles, a Toyota Corrola and a Camry were moving towards the venue when they were intercepted by security agents and asked to go back because cars were not allowed at the venue. The sources said that reluctantly, the drivers of the two vehicles turned and parked where other vehicles were parked but as soon as they parked, the two drivers left and within 30 minutes, the Toyota exploded and killed some people. While the people around were trying to attend to the victims, the Camry which was torn to smithereens exploded but this time caused greater havoc as more cars got burnt and more people killed.

According to sources, more than 28 cars were burnt while about eight people, including security agents were killed.

The Minister of Police Affairs, Alhaji Adamu Waziri who visited the scene of the incident, confirmed that there were casualties but put the number of the dead at eight.

'Well, I want to begin by thanking the Almighty for this 50th anniversary and also express my profound happiness,' the minister said. 'With this incident there is a blight on this momentous day for all Nigerians. But in this time of adversity, it is desirable of all Nigerians to pray that these irritations that occurred God intervenes to bring them to an end. The information I have is that there were two explosions. What we can say is that the first explosion, apparently a taxi laden with bomb exploded.

'Initial reports indicated that there were no casualties. Then there was a second explosion within a spate of 10 minutes. And that caught a couple of citizens, both members of the security cadre and civilians. The resultant effect is that eight people are confirmed dead and 18 are injured. The casualties, both the dead and injured involved members of the police and other security agencies as well as very innocent Nigerians.

'I use this opportunity to pray for the repose of all those who lost their lives and also pray for those who suffered severe and multiple injuries for God's mercy on them so that they can recover.''

The police anti-bomb squad led by the Commissioner of Police in charge of the department, Chris Olakpe, moved in immediately to avoid further havoc. He led his men to conduct a search on some of the vehicles parked at the venue while samples were being taken from the wreck of the two vehicles that exploded with the bombs. The two lanes that pass through the scene were cordoned off to enable security operatives carry out their work.

Olakpe told The Guardian last night: 'I cannot say much now because we are in the mood of investigation over the matter so we will make a public statement after our investigation then we can give enough details.'