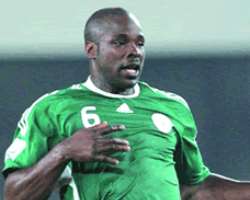 Shittu
Former Super Eagles utility player, Garba Lawal has frowned at the dropping of the Daniel Shittu from the squad that will engage Guinea in an African Nations cup qualifier on October 10 in Conakry. Speaking with Daily Sunsports in Abuja, Lawal, a member of the gold winning Nigerian team at the 1996 Atlanta Olympic Games said that Shittu needed help now that he was clubless and should have been invited to be part of the team for the match.

He said the young man [Daniel] had shown so much commitment to the country in all the matches he played and that he had also been outstanding in some of these matches to merit a call for the match against Guinea.

'I am not faulting the coach for not picking him but I really think, we should rally round Shittu to get a club now than ever before. He may not be skilful defender but what he lacks in skill he makes up with his enthusiasm and commitment to the game and country

'In Calabar, he was not that bad and I think he needed to be in the Eagles camp to attract clubs to come for him. He cannot get a club if he is rejected at this point in time by his national team so I really think we should help him by carrying him along for a little more time.

'In the days of the Super Eagles under Clemense Westerhof, Bonfere Jo and Bora, some players without clubs were called up to revive their career and it worked so why not do same to Shittu? There are players who play for some clubs that are no better than local league clubs here in Nigeria but they get invited because they are foreign based players

'Another issue here is the claims that bench warmers would no longer be part of our national team. You see some clubs can out of hatred or one thing put a player out of action for a long time. It does not mean that the player is not good and should no longer get national calls. I pity Shittu and I pray we involve him in subsequent matches to help him get a club in January' he stated.