I HAVE GIVEN EVERYTHING TO NIGERIA BUT 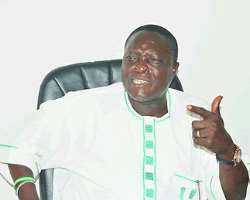 Ladipo
In the past 33 years, Dr Rafiu Ladipo, the quintessential president general of Nigerian Football and Other Sports Supporters Club, has progressively carved his name in gold, travelling across the world at the risk of his life and business, to cheer various national football and other sports teams to success. His belief, determination and staying power in Nigerian sports have, however, not gone unrewarded.

Across Africa and even beyond, Ladipo's name resonates as someone who has brought dignity to Nigeria and indeed, Africa. Wherever a Nigerian national team plays, members of the Nigerian Supporters Club under his watch, are sure to be there in their hundreds, singing and dancing, beating their drums, blaring their trumpets and dishing out delightful Nigerian tunes, which bring hope and encouragement to the players, even as they remain entertainment to the spectators. Many call the Supporters Club the 12th Nigerian player on every playing turf.

Looking back, Ladipo is every inch satisfied, even when Nigerians do not seem to recognise his modest effort at giving Nigeria a good image abroad.

'In the last 33 years, I have been selflessly serving this country,' Dr Ladipo declares in a no-holds bar interview with Daily Sunsports. 'I and members of the Nigerian Supporters Club have been travelling around the world, supporting various Nigerian national teams. We are happy we have been doing that job well.

'Some people have this belief that we only go out there to sing and dance. Beyond that, we are good ambassadors of this country. We have portrayed Nigeria in positive light at all times, especially when people from other countries refuse to recognise Nigeria as a force to reckon with. I took up the challenge of letting the world know our strength with the Supporters Club preaching the Nigerian gospel to the world, thereby giving Nigeria a good image.

'During the 1994 World Cup in the USA for instance, there was this bold inscription: 'Beware of Nigerians' displayed at the Minneapolis Airport. Seeing that, I was shocked. Upon enquiry, I was told that it was because Nigerians, before then, had been involved in various social vices. But I tried to change that impression when I attended a convention in Las Vegas prior to the World Cup. I had to put on a green and white 'agbada' on a day everybody, who came to represent his or her country's team appeared in T-shirt of his or her country's colours. Mine, a flowing 'agbada' was totally different.

'People were startled. They kept looking at me with great surprise. Some went as far as touching me. They besieged me, wanting to know where I came from. I told them that I am a Nigerian and they were shocked at my patriotic zeal. From that venue, I made up my mind that I would always appear in Nigerian colours anywhere Nigeria is featuring in any game and I have not looked back since then.

'During the World Cup proper, over 300 supporters travelled with us to the USA dressed in green and white 'agbada'. When we arrived at the stadium in Dallas, it was Nigeria all the way, as we drummed and danced. In the course of that, Rashidi Yekini netted Nigeria's first-ever World Cup goal against Bulgaria. Ever since, we have remained faithful to changing Nigeria's image while cheering the national teams.'

He recalled that it was through sheer personal effort and commitment that he had grown the Supporters Club into an oak, insisting that he had ever remained happy doing what he's doing.

'Before I became the national chairman of the Supporters Club, I was the club's national flag bearer for years. No player ever went into the pitch before me, ask Christian Chukwu, Segun Odegbami and others. When I became the national chairman, the club was operating only in Lagos. With people of like minds, we launched the first chapter in Ibadan in 1991, and from there, we took it to all the states of the federation.

'In 2000, we launched another chapter in Ireland and then Japan in 2002. So, the Supporters Club is almost everywhere in the world.'

Ladipo admits that being a member of the Supporters Club is not a bread and butter business, maintaining that there're lots of nerve-wrecking challenges in it.

'All we have been doing has been possible through our personal efforts. There has never been any government support coming our way. Beyond that, anytime we are travelling, we leave our jobs and families behind. When we get to the venue of a football match for instance, we are face with lots of danger. FIFA and CAF laws only protect players and their officials; none protects the supporters. Most times, we have been targets of attacks, times and again, we have been brutally attacked in foreign lands.

'Severally, I have been beaten up in some African countries, specifically in Ghana, Sudan and recently, in Kenya, during the last qualifying games ahead of South 2010 World Cup. But I see this as the price I have to pay for the sake of Nigeria.'

However, Ladipo is happy that the Supporters Club has drummed itself into the good books of FIFA and the world community.

'At all times, I'm satisfied that we are the best in Africa and one of the best in the world. For instance, in 1994, we were adjudged the most entertaining supporters club in the world. We retained that position in 1996 and in 1998.

'In 2001 in Trinidad and Tobago, we arrived late to the stadium and had no tickets because they were all sold out via the Internet. Suddenly, FIFA President, Sepp Blatter, arrived in company of Jack Warner and CAF President, Issah Hayatou and after listening to our plight, Blatter instantly directed the Local Organising Committee of the championship to issue us with tickets. The moment we settled down to entertain spectators, the stadium came alive. After the match, Blatter decreed: 'On no account should members of the Nigerian Football Supporters Club be missing out at any FIFA-organised competitions. After the match, Blatter stormed the turf and for seconds, he hugged me in appreciation, thanking me for our splendid performance.'

Despite laundering Nigeria's often-battered image with the activities of the Supporters Club, Ladipo has yet to be honoured with a garland for his courage and patriotic zeal. But he said that was the least of his worries, maintaining that honours would naturally come his way in due time.

'I believe the time for me to be honoured hasn't come,' he toned with the ting of expectation. 'When my time comes, I, like other Nigerians who have contributed to our national glory, will be honoured,' he added with stoic patience.