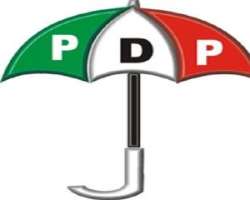 
San Francisco, Sept 22, (THEWILL) – The leadership of the Peoples Democratic Party (PDP) today suspended all congresses and primaries which were slated to have started on Saturday, September 22, 2010.

According to a statement signed by the party’s National Publicity Secretary, Professor Rufai Ahmed Alkali, the NWC of the party said it took the decision because of the move by INEC to alter the election timeline.

The statement in full reads: "The National Working Committee of the Peoples Democratic Party (PDP) has directed the suspension of all Congresses and Primaries scheduled to commence this weekend till further notice.

"2. Rising from its meeting held on Wednesday 22nd September, 2010 the NWC said this action has become necessary in view of the joint decision by the Independent National Electoral Commission (INEC) and all Political Parties at their meeting yesterday.

"3. Nigerians will recall that INEC and the parties agreed to a shift of the earlier advertised dates for electioneering activities.

"4. However, the sale and return of Expression of Interest Forms and Nomination Forms shall continue as earlier announced. New dates for all PDP Primaries and Congresses shall be communicated in due course."