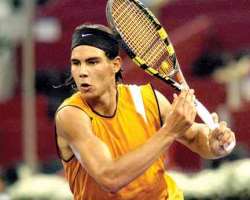 Rafa Nadal arrived back in Madrid on Wednesday after becoming only the seventh man to win all four grand slams and immediately dismissed the idea he was the 'Spanish Special One'.

The 24-year-old has been involved in a whirlwind round of public events and television appearances since capturing his maiden US Open title by beating Serb Novak Djokovic in Monday's final.

Nadal, though, said he could not be classified as Spain's all-time greatest sportsman despite adding the season's final tennis grand slam to his five French Opens, two Wimbledons and one Australian Open championship.

'I think it's obvious I'm not,' the left-hander said in an early-morning news conference at Madrid airport after his overnight trans-Atlantic flight from New York.

'It would be tremendously arrogant of me. All athletes have their merits for what they have done in their particular sports.'

World number one Nadal continued to display typical modesty when he apologised to reporters for the early news conference.

'I'm very grateful. I know it's a difficult time of day. I'm sorry,' said the Spaniard.

Nadal also explained the improved serve that surprised many pundits at Flushing Meadows.

'The truth is I was not serving very well in the tournaments leading up to the US Open,' he said.

'I've worked hard on the service because it needed it. I decided to change my grip two days before the tournament, to make it (the ball travel) quicker especially when serving against the wind there always is on centre court at Flushing Meadows.

'It was a risk but I had to take it and it all worked out pretty well.'