DIABY OUT FOR TWO GAMES 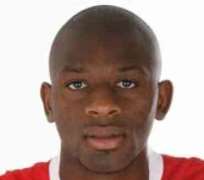 Abou Diaby
Arsenal midfielder Abou Diaby has been ruled out of at least the club's next two fixtures with an ankle injury.

The France international sustained the problem in the 4-1 win over Bolton on Saturday following a dangerous challenge by Paul Robinson.

Gunners boss Arsene Wenger admitted to his concern after the result, revealing that Diaby was in some discomfort.

It had been feared the 24-year-old would be sidelined for a lengthy spell, and it has been confirmed he will miss at least the side's next two matches.

Arsenal take on Braga in the UEFA Champions League on Wednesday before travelling to Sunderland on Saturday.

Meanwhile, Thomas Vermaelen is set to be absent during midweek with an Achilles problem but could return on Wearside.

Wenger said, 'Diaby is out with an ankle problem following the tackle from Robinson and I do not know for how long.

'He will not play tomorrow (Wednesday) and certainly not at the weekend.'