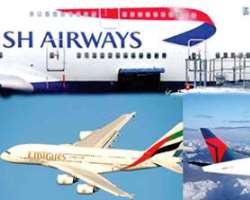 Foreign airlines are deploying numerous strategies to gain dominance in Nigeria's juicy air travel market amid stiff competition, reports OYETUNJI ABIOYE. Nigeria, the most populous black nation on earth, offers one of the most robust travel markets in the world. This underscores the fact that Nigerians love travelling. Experts have thus predicted that air travel in Nigeria will grow in geometric progression in the next few years.

Currently, over 25 foreign airlines operate in Nigeria's travel market. The market, for a long time, has been dominated by European carriers, especially the early comers into the country.

In the last six years, however, there has been a paradigm shift in the market with the coming of Middle-East and American carriers into the Nigerian market.

The coming of the Middle East airlines, particularly Emirates Airlines and Qatar Airways, led to a major 'slice'of the market share, formerly dominated by European carriers such as British Airways, Air France, KLM and Lufthansa. Other European carriers operating into Nigeria include Iberia Airlines, Alitalia, Turkish Airlines and Virgin Atlantic.

The development caused a sharp drop in both market share and revenue of the European carriers.

Local industry analysts and stakeholders say the introduction of direct fights between Nigerian and the United States by the American carrier, Delta, which came into the market about four years ago, caused a further decline in the European carriers' revenue in Nigeria.

For example, Ohunayo says over 78 per cent of passengers travelling on Emirates from Lagos to Dubai are heading for America and Asia.

The passengers, according to him, used to fly on European carriers, especially America-bound passengers.

On why most of the passengers shifted their patronage to the Middle East carriers barely 10 years after the carriers came into the Nigeria market, Ohunayo explains, 'The Middle Eastern carriers have carved a niche for themselves by slicing the market share of the European carriers, using improved in-flight service coupled with newer and larger long-range aircraft. They have the youngest fleet in the country. They have raised the service bar very high.'

Another major strategy, which has worked so much for the Middle Eastern carriers against other carriers in the Nigerian market, is the increased baggage allowance, according to the Managing Director of Belujane Konzult, an air travel consulting firm, Mr. Chris Aligbe.

He says, 'Most Nigerian traders going to the United States and Asia to buy goods prefer the Middle East carriers because of the extra baggage allowance offer. They offer double kilogrammes of what the European, American and other carriers offer on each of the two check-in luggages. They definitely prefer this because it will help them to carry their goods at reduced cost.'

Industry observers also say most Very Important Personalities in Nigeria, especially those travelling on government ticket Middle East usually in the First or Business Class, now prefer Emirates because of the services they enjoy.

Emirates offers free one-night accommodation on its upscale hotels for premium passengers willing to spend a night in Dubai.

Because of the treatment they get in some of these hotels, most passengers, prefer to pass through Dubai to the US and other places.

But the European carriers, according to stakeholders, have woken up to the reality of the fierce competition from the Middle Eastern carriers, and are now consolidating through alliances to beat the challenges.

Ohunayo says, 'The Europeans carriers are consolidating and expanding alliances.'

Airline alliances are a kind of global partnership allowing carriers in the same alliance to carry each other's passengers to their final destinations when they do not fly those routes.

The three major global alliances are Star, Skyteam and Oneworld. It helps member airlines to do joint marketing of routes. This is helping the European and American carriers in Nigeria.

The Publisher, African Travel Quarterly, Mr. Ikechi Uko, says the European carriers have been able to check the incursion of the Middle East carriers with the alliances.

He says, 'European carriers have survived the market grab by the Middle East players using alliances and frequent flyer programmes.'

However, Ohunayo believes that the ME carriers are up to bigger share of the African market in the nearest future.

'The Middle-East carriers have a strong sixth freedom market, which may transform into a major future share in the African continent,' he says.

He, however, stresses that the battle for dominance for Nigeria's market among foreign airlines will become hotter when the United Airlines and Continental Airlines join Delta on the Nigerian route next year.

According to him, 'American carriers have just realised that the yield on African route is high compared to their over-protected domestic market.'

Confirming this, the Country Manager (Nigeria), Delta Airlines, Mr. Bobby Bryan, says, 'Traffic into Africa is increasing and the airline is set to increase frequencies into Nigeria and other countries.'

Olumide notes that American carriers are now flying and expanding into Ghana, Liberia, Senegal and others.

Hence, he says that the competition will become stiffer among the European, Middle East and American carriers.

However, he laments that Nigeria, the owner of the market, is standing aloof, allowing the foreign carriers to cart away billions of naira from the country.

He is worried that Nigeria lacks a big airline that can become a major player in the intercontinental travel market.