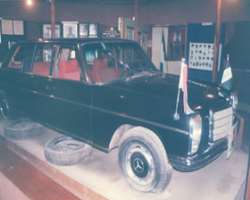 ON February 13, 1976 when Nigeria's Head of State, General Murtala Ramat Muhammed was assasinated the nation was thrown not only into mourning but in worry of what to do to immediately to immortalise him. Especially, the last relics of his life like the specially designed long Mercedes car he was being chauffeur-driven in when he was killed.

In the wisdom of the ruling military council of the time the car was sent to the National Commission for Museum and Monument (NCMM) and a gallery tagged Nigeria Government: Yesterday and Today, was built around it.

Muhammed's killing was like a scene pulled out from a classic Russian tragedy script. And a visit the gallery which stood for public viewing until it was dismantled for structural renovations in 2007 was like a work into a rare hive of tragic scenes.

It was an unforgettable remembrance last Saturday in Lagos as the black Mercedes Benze car was moved into a permanent new show hall also named Nigeria Government: Yesterday and Today. The unveiling of the new abode of the national monument which brought back memories of the charismatic leader coincided with the opening of a one-month long exhibition tagged Pottery in Nigeria: A Countrywide Heritage, which began in the premises of National Museum, Onikan, Lagos. The exhibition is also holding within the same abode of the Nigeria Governments showcase gallery

The exhibition is staged as part of activities by NCMM commemorating the golden jubilee celebration of Nigeria.

Apart from the pottery exhibition which has over 50 works of ancient and modern Nigerian pottery pieces on display, the photo exhibition serves engaging images of high standard. Also, the 50-piece exhibits in the Nigerian Governments show which symbolically capture the 50 years of Nigeria as an independent nation, chronicle tales of Nigerian political history and leaders from diverse cultures, schools of thought and regions. It tells the story of past, present and future of Nigerian leaders starting from the colonial era. The photos are interesting. Like a real life action, many of the photos bring to fore the reality of the country's modern history. One of such was a short taken during the Nigerian Civil War during a meeting between the heavily bearded leader of the defunct Republic of Biafra, Chukwuemeka Odimegwu Ojukwu and the former Head of State of Nigeria, Yakubu Gowon, during the Aburi Conference in Ghana. The meeting was brokered by Gen. Ankra of Ghana who was later assassinated.

Other remarkable historic shots in the collection that attracted viewers' attention at the exhibition include those of such colonial administrators as Lord Lugard, Hugh Cliford, Arthur Richardson, John Macpherson, James Robertson. Others were First Republic Prime Minister, Sir Abubarka Tafawa Belewa, Dr. Nnamdi Azikiwe, fondly known as Zik of Africa, first Military Head of State Major General Aguiyi Ironsi, General Yakubu Gowon, Gen. Olusegun Obasanjo, Alhaji Shehu Shagari, Gen. Muhammadu Buhari, Gen. Ibrahim Babangida, Chief Ernest Shonekan, Gen. Sani Abacha, Gen. Abdulsalami Abubakar, Obasanjo as a civilian President, Alhaji Umaru Musa Yar'Adua and President Goodluck Ebele Jonathan. Despite the many exhibits on display around it the bullet-ridden Mercedes Benz car in which Muhammed was assassinated. Was the centre of attraction. Just a look at the damage done by the bullets, reminded those who earlier knew about the incident of the painful as many who already knew much about the event turned into emergence museum instructors explaining the exhibit to other guests. Those who knew little could also feel the gory incident from the grate created by the hot bullets all over the car. They saw how the metal pellets tore through the drivers' sit to where the late Head of State sat at the back. The long car, exhibited along with its spare tyres reminds all who see it of what a painful death Muhammed could have had and what a sad country the February 13, 1976 morning could have caused.

Considered collectively, the showcase in the building named Murtala Mohammed Gallery give an insight into the various stages of government from the pre-colonial era to date.

“The Murtala Gallery is essentially about pre-colonial and colonial government as well as the first, second, third and military regimes,” said Yusuf Abdallah, Director-General of NCMM. The Murtala Mohammed Gallery has for years been a major attraction of the National Museum because of the late Head of State until it was dismantled. With its rebuilding, the attraction has returned.

The exhibits in the pottery exhibition were pieces ofpottery which Nigerians use in such situation as in domestic chores, rituals, at grave sites and for burial purposes. There were also decorative pottery pieces and those for social use and musical performances.

Minister of Tourism, Culture and National Orientation, Abubakar Sadiq Mohammed, who declared the exhibition open along with other top government officials and Directors in the Ministry, described it as a unique exhibition. Abubakar said that the two exhibitions (pottery and Nigerian governments) represent a significant landmark in showcasing the country's heritage. Because pottery and its associated objects are vital domestic items used in virtually all geo-cultural zones of the nation for aesthetics, storage and cooking purposes, just like leadership touches every aspect of the people's life. Muhammed therefore told the gathering which includes veteran artists like Bruce Onobrapkeya that the importance of the exhibition cannot be overemphaised.

“This exhibition and the subsequent commissioning of the Murtala Mohammed Gallery, is aimed at reminding us about our diverse but similar heritage, the sacrifice of our fathers, some who unfortunately lost their lives to ensure that Nigeria is not only united but stands as an independent and sovereign nation, which it is today. The onus therefore lies on us, as a people to constantly remember our past as a nation and forge ahead together as people with one voice,” the minister said.

Commending the administration of NCMM for keeping faith with its promise to meet the yearning of visitors to the museum by the return of the the Nigeria Governments permernent, exhibition, the minister said that it is a good news that the exhibition which begins the NCMM's commemoration of the golden jubilee of Nigeria, will also bring back some of the interesting things that people eagerly look for in the gallery. According to him, “This exhibition is to remind us on a daily basis about our uniqueness as a people, which abounds us our cultural diversity and will futher remind us that no matter what, our strength lies in similarity and unity.”

Director-General of NCMM, Yusuf Abdallah, informed that the purposes of the exhibitions is to show that pottery is an art that is practiced in all the ethnic group in Nigeria and to capture the land's landmarks in government. Noting that in every part of the country, there are pots made for rituals, domestic, storage and, decorative, Abdallah said the pottry exhibition potrays all these facts. “This exhibition thus shows that while there are differences in traditions and philosophies among Nigerians which has given rise to different sculptural styles, there are some common underlying philosophical and psychological bases that forms the pottery production. These reflections if properly internalised could provide a common root that can cement the country together as one people,” Abdallah said