A CASE FOR ANIOMA STATE 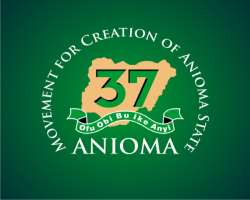 Folks, the preceding question and many more questions that we will be asking as we continue on this journey are legitimate in my humble opinion.

In order for the Nigerian project to work, methinks there has to be Equality, Fairness and Justice in the polity and across board. I believe that a good step in that direction would be to create 2 [Two] more states in the South. And if two more states were to be created in the South to create a balance in the North and South dichotomy, the logical question to any fair minded person would be why not Anioma State?

In the 2nd Republic Government of President Shehu Shagari, history would show that the then Nigerian Senate and House of Representatives had approved the creation of additional States, of which Anioma State was one of the states to be created; only for the Military to strike before President Shagari could make the announcement. Since that time till now due to all kinds of dynamics, the issue of proposed Anioma State has been put on the back burner. Also, the fact the present Anioma Political Class and elites are dormant in the area of service and self centered in socio politically hasn’t helped matters one bit.

Just to be clear, the proposed Anioma State fulfills ALL the criteria laid down by the Nigerian Constitution for the creation of States. The proposed Anioma State has what it takes economically to be independent and self sufficient. We already have a capital city in Asaba with adequate infrastructure in place for a new Anioma State take-off. As many of you are aware, the Anioma people are the most Homogenous and culturally bonded ethnic group in Nigeria. Our shared cultural heritage and modest Anioma values can be credited also for the relative peace and harmony in Anioma land as Anioma land is adjudged by many as the most peaceful area in Nigeria. Available statistics would show that incidents of kidnapping, murder, armed robbery, religious intolerance, inter-tribal clashes etc. are minimal or non-existent. Our human capital ranks in the top tiers among the ethnic groups in Nigeria. With well trained professionals in all fields of human endeavor, Anioma land prides itself as having the necessary resources above and below the ground to be the 37th State in the Federal Republic of Nigeria.

Finally, just to re-iterate, that the basis for existence of any country that is multi-ethnic such as Nigeria has to be Equity, Justice and Fairness.

need to change the most. We have already addressed the need to change or reconstruct our value system into one that asks to cater to the common good of all.

geographical contiguity and relative cultural similarity. The economic justification for the creation of Anioma State is no more, and no less than that of any of the others in Nigeria such as Yobe, Gombe, Jigawa, Taraba, Kebbi, Kogi, Nassarawa etc.

developmental needs of the people concerned. Anioma people are one people yet they are scattered amongst several states like Rivers, Imo, Delta, Edo and Anambra.

In each of those states mentioned, the Aniomas have been relegated to the bottom of the pits in spite of their contributions to the Nigerian project on the national level.

It is therefore not a secret anymore that the Anioma community been marginalized and underdeveloped due to the anomaly of not been contiguous.

For my Anioma brethren who may be wondering why agitate for Anioma State? Well, the

benefits of autonomy by way of statehood cannot be over-emphasized since it will bring the much needed development closer to our people. It will create new Ministries to address all areas of governance; new and well staffed higher institutions, factories and manufacturer plants etc. will be created as a result.; Anioma land will have Anioma leaders govern them; Anioma people will then be in a better position to hold non-performing office holders accountable in our own Anioma way without any complicity or influence from external forces; and those living outside Anioma land/the Diaspora now will have a greater incentive to move back to help develop their homeland.