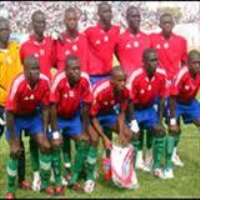 Gambia started their 2012 Africa Cup of Nations qualifying campaign on a promising note after beating Namibia 3-1 in Banjul on Saturday.

The Scorpions raced into a 3-0 lead with goals from Sainey Nyassi, Momodou Ceesay and Ousman Jallow.

Wilko Risser got the consolation for the Brave Warriors with a header in the 89th minute in the Group F game.

Gambia are top of the group with three points as opponents Burkina Faso are not in action this weekend.

This follows the withdrawal of Mauritania from the qualifiers, which means the group is now left with three teams.

The Scorpions were determined to make home advantage count for them and when Aziz Nyang sent it a cross from the right it found an unmarked Nyassi, who made no mistake by heading in at the far post on ten minutes.

Three minutes later Ceesay doubled the home side's lead after profiting from a poor clearance by Hartman Toromba to score from close range.

Another defensive slip up by the Namibians in their penalty area before the break allowed Jallow to steal in to make it 3-0 and send the home fans into ecstasy.

Risser headed in Edward Asino's cross from the right with only a minute remaining but was it too late from them to stage a late comeback.

Gambia will play against Burkina Faso in their next game in October.

The Scorpions are seeking to qualify for the Africa Cup of Nations for the first time.