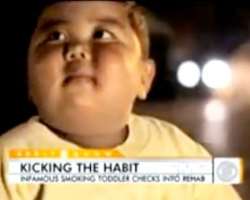 by Kelly Rose Bradford Sep 3rd 2010
Categories: Latest news
A two year old boy who was hooked on cigarettes has kicked his 40-a-day habit after a spell in rehab, enduring treatments which left him banging his head against the walls and screaming as his withdrawal took hold.Aldi Rizal, who lives in Sekayu, Indonesia, was placed into therapy by worried officials, despite his parents only asking for help when their son's nicotine habit became a financial burden.

Aldi was first given a cigarette by his father to 'ease a headache' when he was just eleven months old. The toddler soon became addicted, throwing tantrums if his demands for more tobacco were not met.

After three months of treatment, Aldi is said to be free of cravings and playing normally for the first time, although medics say his heart lining has thickened and he often appears listless and vacant.

His mother, Diana, 26, told reporters she was glad her son was no longer smoking, adding: 'The money can now go on other things.'

What do you think about this story? Should his parents be facing prosecution?