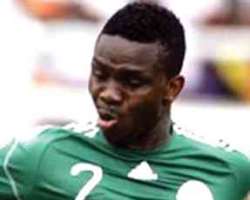 Yobo
Super Eagles skipper, Joseph Yobo, is billed to join his colleagues on Friday (today) for training at the U.J. Esuene Stadium in Calabar.

Nigeria is preparing for a Nations Cup qualifier against Madagascar and the former Everton player has been busy with his movement from the Liverpool team to Fernabahce of Turkey.

The Chief Media Officer of the Nigeria Football Federation, Robinson Okoson, told our corresp-ondent that Yobo informed the NFF and the coaches about his lateness.

Okosun said, 'He was in touch even while he was sorting out his movement from England to Turkey. We expect him to be part of the morning training and it will depend on the coaches to decide if he could make the team based on his fitness level.

'We understand his situation because he has always been a committed player.'

A total of 24 players left Abuja on Thursday for Calabar after training for two days in the federal capital city.

The players and officials are staying at the Amber Tinapa in Calabar. The 26-man team from Madagascar will also lodge at the same hotel.

Acting Coach, Austin Eguavoen, on Thursday said that it was important to win well in the encounter.

'We are going all out for a win. This is the first match and the best thing is to start well. We have been working hard and I expect a great game and great result in the encounter,' Eguavoen said.

The Nigeria, Madagascar match holds on Sunday in Calabar.