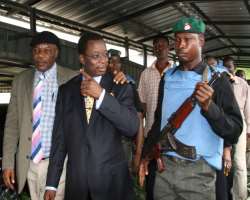 Justice Mohammed Idris, who presided, held that the accused person was entitled to bail, saying, however, that he must fulfill certain conditions before he could enjoy temporary freedom. He therefore granted Mr. Akingbola bail in the sum N500 million naira with three sureties.

The Economic and Financial Crimes Commission is prosecuting Akingbola on an alleged 22-count charge of theft, market manipulation, insider trading, abuse of office and economic crime of about N346.1bn and £10.9m.

The lead lawyer to Akingbola, Chief Felix Fagbohungbe (SAN), had urged the court to grant his client bail on the grounds that the charges against him are bail-able charges.

But the EFCC’s lawyers had opposed the bail application claiming that the accused person might jump bail.

Justice Idris, having reviewed the submissions held that bail was at the discretion of the judge, saying that it has to be done judiciously.

The judge also hinged his intention to grant bail to the accused on the grounds that he returned to the country voluntarily.

He also faulted the claim of the EFCC that Akingbola was declared wanted, saying that it was when he was outside the country that the notice was issued.