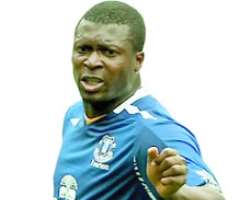 Aiyegbeni
West Ham United's interest in signing Super Eagles' striker, Yakubu Aiyegbeni, has wanned. The club said its interest to sign Yakubu since the arrival of new manager, Avram Grant, had faded since it needed a younger, quicker and better players that would give them the edge in the premiership.

The Hammers have been tracking the African ace for much of the summer, having decided that its strike force was in need of strengthening. Co-owner, David Sullivan, said the club would be better advised to bring in a potential star of the future, rather than a 27-year-old striker who has struggled with injuries in recent times.

“We have cooled on Yakubu,” he said. “When you have taken a good, hard look at him, we want younger and quicker and better players.” Reports suggest Everton is holding out for somewhere close to £8million for its player.

As Yakubu is a proven Premier League goal-getter, the Upton Park outfit felt he was an ideal candidate to bolster its ranks. The club has, however, been frustrated in its efforts to take him to the capital, with Everton reluctant to do business. The Toffees feel the terms on the table are unacceptable and have informed the Hammers that they will need to up their offer if they want to land Yakubu. West Ham is reluctant to increase its bid, though, and could now turn its attention elsewhere.