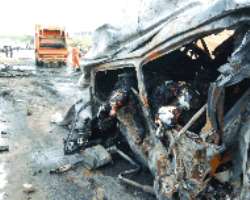 Seven days after the disaster that claimed about 72 lives on the Lagos-Ibadan expressway in Lagos, most families who lost lives to the incident are yet to identify their bodies.

The major hitch is the proof of identity of the bodies that were charred in the petrol fire beyond recognition.

The crash occurred after a trailer that was allegedly trying to evade police rammed into a stationary vehicle at the police checkpoint and exploded. This accident which occurred at12 noon left over 19 vehicles including four fully loaded commercial buses burnt beyond recognition while many people sustained varying degrees of burns.

Although the spot has been cleared, people still strolled there with long faces searching for jewellery, pieces of wears or anything to confirm or take as symbol that their loved ones left a remembrance. The search is also a traditional quest to accord such victim rites of passage by the family members.

As at the time Saturday Sun visited the accident scene some days after, there was still a piece of dissected human body part lying by the side. That was very likely part of the body of a victim that had been evacuated.

An elderly woman was spotted scooping sand from the spot where the incident occurred in defiance of pleas by family members to leave the highway. Saturday Sun gathered that the woman whose daughter could be among those that were roasted dead came to scoop the sand when the family could not identify her body at the mortuary. 'I don't want my daughter's spirit to continue roaming about that is why I need to take her ash home and bury her so that she can rest in peace.'

Looking visibly shaken from the trauma of the incident, a witness who identified himself as Benjamin, screamed at the reporter for asking him to show the exact spot of the incident.

With further inquiry, Saturday Sun found that Benjamin Ibekwe who claimed to be the father of five said that it was his wife that drove him out of the house to go and fend for the family. 'My sister I am sorry for shouting at you. It is a carryover of the horror I witnessed here. I was at the spot when it happened. I decided not to come to work again but when my wife reminded me that school will soon resume and that landlord would soon come knocking I had no choice but to come.'

Benjamin explained that the trailer was trying to escape from the police stop and search when it hit another vehicle that was parked on the highway and an explosion occurred. 'It was the police that caused the crisis. They drove these people to their death. You appreciate life better if you were at the scene, some passengers especially in the bus sat still and roasted to death. The stampede in the bus was so much that it became impossible for anyone to escape.'

According to another eyewitness account, Ajayi, said it was the recklessness of the police to collect N50 from motorists that caused the death which toll rose to about 72 some days after. About 25 vehicles were involved in the multiple accident and all got burnt.'

Ajayi said that the police had stopped some cars and buses on the bridge when a speeding truck hit one of the vehicles from behind. This created panic among motorists who hit each other in that chain, somehow in a bid to escape the impending danger.

Another eyewitness who gave his name as Muyiwa Adewale, a roadside mechanic, recalled that the driver of the ill-fated trailer which was carrying sugar disobeyed orders from policemen at the checkpoint and rammed into a stationary vehicle waiting to be cleared by the police. He said the trailer exploded instantly.

The witness said that flames from the exploded truck spread to other vehicles on the queue and that it caught up with two fully loaded Toyota commercial buses, leaving all the passengers completely burnt.

Despite the conflicting report as to the number of people involved in the explosion, Dr Oke Osanyintolu, DG Lagos State Emergency Management Services (LASEMA) insists that only 15 persons died in the fire. He recalled that when they were notified of the accident around 11.30am that Sunday morning and LASEMA rescue team and officials of the state Ambulances services arrived promptly.

'We were able to clear some of the debris and rescue some people that were trapped. I can say that but for us, the casualty index would have been higher. Those injured were 18 while 15 others were burnt beyond recognition. The injured ones were treated on the bill of Lagos State government and the dead were taken to the mortuary at the General Hospital, Isolo.'

He admitted that LASEMA is currently faced with the challenge of ensuring that the right corpse is released to the right family.

'It is difficult but if the family can come forward with proof of rings or any other belongings that survived the inferno then we may be able to determine which corpse belonged to who, but somehow we will get round it.

'We are working with their families on how to identify their dead ones at the mortuary.

But the wounded ones have been treated and discharged at our auto trauma centre along the Ibadan expressway. We will also get forensic experts to help in the entire process. However, we will have to organize a mass burial for the unclaimed victims whose relations didn't show up.'

LASEMA boss called on people who are looking for their loved ones to also check out the other areas where similar accident occurred in Lagos that same day. He revealed that there were five major accidents in the state that day and people died in each scene. 'Not many people knew the other incidents because of the magnitude of the Berger incident. There were accidents on Murtala Muhammed Way, another at Lekki, one at Sango and one other. It was really hectic for us but we were able to handle everything. We call on people who are still looking for remains of their family members or those who suspect that their family members may be involved in the accident to come to our office at the Isolo mortuary, auto trauma centre or any police station and they will be attended to.'

Meanwhile the Nigeria Police still insist that they had nothing to do with the Sunday incident despite all the testimonies that prove that it was the stop and search point at the dangerous bend that caused the accident. The Police Public Relations Officer, Frank Mba while sympathizing with the families of the deceased promised to investigate the extent at which the police was involved insisting that anyone who has useful information should inform the police. 'I went to the accident scene myself. I also interviewed people and they said they did not see any policeman around the area. That place is a slope. We don't block road in Lagos State. What we have is just stop and search and at the time of the incident, there was none there.'