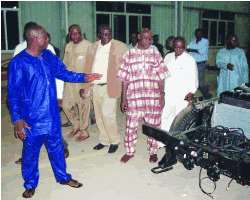 Nigeria's youngest large-scale automotive investment, Innoson Vehicle Manufacturing Company Limited (IVM), Nnewi, has continued to receive high profile visitors following the recent tour by a Ghanaian team led by the Deputy Minister for Transport, which was dispatched by the government in Accra to discuss business deals with the Nigerian plant.

Only a couple of days after the Ghanaians left Nnewi, Innoson played host to other very important delegations, including members of the House of Representative Committee on Industry, as well as the caretaker executive of the National Union of Road Transport Workers (NURTW), Lagos state branch, both of which were not just impressed by what they saw, but also pledged to help uplift the auto maker.

Led by Hon. Solomon Ajidani, the Representatives emphasized the importance of investments such as the vehicle plant to the economy, and lauded the vision of the Cairman of Innoson Group of Companies, Chief Innocent Chukwuma, who defied the obvious odds to go into auto-making at a time the existing ones are either dying or operating skeletally.

Specifically, the Industry Committee Chairman assured Chukwuma of team's readiness to cooperate with him in his quest to get incentives from government and relevant agencies in the manufacturing sector.

Hon Ajidani remarked: 'From what we have seen in the factory, we are convinced that the plant needs support. And we hope that we will be able to lend as much support as we can, so that when next we come here, we will see a lot more activities.

We also want to thank Chief Chukwuma for what he is doing for Nigerians. The passion displayed by Chukwuma is remarkable. As members of the committee, we assure those in the manufacturing sector, that we will do all we can to encourage them'.

While being shown the various sections of the factory, the visitors asked questions on quality assurance, and each time the issue was raised, Chief Chukwuma, who was accompanied by his elder brother, Chief Gabros Chukwuma, provided the needed answer, to the satisfaction of the curious, but impressed guests.

At one of the sections, the Innoson Chairman took time to explain to them that every finished product, be it mini, midi or big luxury bus, or even pick-up or SUV, is tested at the lowest and highest speed without the vehicle moving an inch. The simulation is meant to test the vehicle's performance in-house, in condition similar to the real road situation.

'At top speed, this automatic system detects in a vehicle any fault that manages to escape the quality process in the production line. If any fault is detected, the vehicle goes back to the production line for correction'. Assuring that everything about the plant, from the smallest input to the high-precision components, as well as the production lines, 'are of top quality standards', he argued that any manufacturer who fails to ensure high quality of both input and end-product, will run into problems in the market.

'Every item I put in my vehicles is high in quality, so that the product will be durable and able to compete favourably with others in the market', the Innoson Chairnman remarked, disclosing that over 260 units of vehicles have rolled off the production lines, and are plying various roads in the country, 'but so far, no user has come back with any fault'.

Aside the 260 units at the plant the Enugu State Government has placed an order for close to 100 units of city buses that will be used in the next phase of a transport scheme launched by Gov Sullivan Chime.

Daily Sun Motoring was informed that the order will be built according to the specifications provided by the state government officials in line with the demands of passenger transportation a city like Enugu.

Reacting to the visits by the House of Representatives members, the NURTW leaders from Lagos and other groups, Chukwuma said he was happy that Nigerians appreciate the IVM project, adding that he was particularly encouraged by the recent visit by Ghanian delegation led by Mrs. Dzifa Aku Attivor, and the lawmakers..

He, however, made an appeal to government: 'As you can see, Innoson vehicles are attracting people from all over Nigeria and even Ghana. So, what we need now are incentives from government. I know that in many countries, all kinds of tax and tariffs are waived for a new investments like our. Moreover, don't forget that we face challenges of poor electricity supply and many other hurdles.

'With the right support, we can meet our target of satisfying the Nigerian market and penetrating other African countries. Transfer of technology from our technical partners to Nigerian, is also part of our goal, and the more we are encouraged to produce the vehicles in the right volume, the more investments we make in local content, locally available human resources and modern machinery'.

Chukwuma argued that the current situation where a lot of finished goods and raw materials are imported into the country, means that Nigerian resources are being used to sustain factories and the work force in Europe and Asia. He, therefore, urged government to create the right atmosphere for the manufacturing sector in order to reverse the trend.

Other Representatives in the delegation were Ekperikpo Ekpo, Berewari Chris, Butalawa Garba, Debo Ologunagba, Aroly Fancy, Sam Apochi and Muri Salem Abubakar, They were accompanied by officials of the National Automotive Council (NAC).