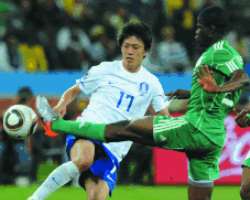 Echiejile against Korea player in South Africa
Photo: AFP
South Korea overcame Nigeria 2-1 in the first international played by the two sides after the 2010 World Cup in South Africa.

The South Koreans displayed great teamwork and midfield domination to stop the Super Eagles from flying. Given the uncertainty surrounding Nigerian football since the Super Eagles' premature exit from the World Cup finals, the team expectedly would have been looking for a victory to boost its morale and confidence.

The 20-year-old Yoon Bit Garam opened the scoring for South Korea in the 17th minute after spending much of the opening stages pushing Nigeria back into her own half.

The Taegeuk Warriors continued to put pressure, and a jittery Nigeria took some time to come to terms with the developing scenario in which the Eagles were clearly second best to the more mobile Asians.

It was something of a surprise then when Nigeria equalised. After a foul on Kalu Uche, the same player stepped up to take the free-kick from the right flank and planted the ball in front of Lokomotiv Moscow's forward, Peter Odenwingie, who sent a flying header into the Koreans net to even the scoreline.

The once entertaining encounter faded into a mere pass and move session for some time until Korea struck once more as half-time approached. Park Ji-Sung lobbed a low pass through four Nigerian legs to connect with Choi Hyo-Jin, who showed great composure to put his side 2-1 up at the break.

Both teams showed the will to get forward early in the second half, prompting an end-to-end encounter.

Nigeria's best attempt at recording an equaliser came from Odemwingie, but his 15-yard strike blew off target. Korea had an opportunity to increase her tally but Chu-Young wasted a clean pass that had sent him in front of Nigeria's goalkeeper, Dele Ayenunga.

In the later stages, both coaches began making a large number of changes, leading to an almost fresh game being served up. Nothing much transpired in the closing moments, meaning the Nigerian players did little to repair their unglamorous 2010 World Cup image before their uncountable fans. Meanwhile, for South Korea, it was a victory which backed up her decent showing in reaching the last 16 of the South Africa event.