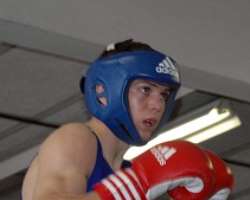 Following his successful return to International competition at the WBC Night Of Champions in Cardiff, 2008 European Bantamweight Champion Luke Campbell was back in action this past weekend at the Four Nations Challenge in Sheffield.

On Saturday Luke, who convincingly won his Featherweight (57kg) fight by a 11-5 points margin over ChinaÆs Jun Tan at the WBC Night Of Champions, continued his winning ways by beating KazakhstanÆs Shulakov Madi by 6 - 4 in the semi final of the Four Nations Challenge.

Luke said of the semi ôHeÆs a very, very good boxer who keeps the pressure on all the time. I wasnÆt at my best, I know that so am really pleased to have boxed well enough to win. I was a bit slow starting, I couldnÆt quite get my rhythm going.

It was a very good win for me. IÆm really looking forward to tomorrowÆs final. Hopefully, with the ring time I have been getting, IÆll get back on top form and get another good win under my belt.ö

In SundayÆs final Luke again faced Jun Tan from China, his adversary the previous week at the WBC Night of Champions. As before Luke dominated the proceedings, this time winning by an increased points margin of 11-3.

Clearly Luke has got his form well and truly back as his performance was slick and telling. The points margin could, and probably should, have been higher for Luke, had an early knockdown been counted.

Following the final Luke said, ôI fought much better, I found my distance and boxed really well. Far better than yesterday. IÆm really pleased with my performance. I know I can build on this.

I donÆt understand why the knockdown wasnÆt counted, it was a clean shot. I caught him with a clean jab that sent him down on his backside.

It doesnÆt matter though as I did enough to win anyway. IÆm really happy with the result. I intend to build on this. My goal is the London Olympics 2010ö

With three great wins over a seven day period, it would seem that Luke is well on his way to making his Olympic dream a reality and is surely now in pole position for the race to secure the 57kg slot in the Team GB boxing squad for the 2012 London Olympics.