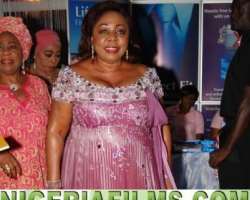 Not many people know that Senator Florence Ita-Giwa is passionate about cultural music. Of course, only very few people are aware that she owns a musical band known as the Seagull Carnival Band.

As a matter of fact, the band has always performed at every edition of the famous Calabar Carnival. It is so visible that no display of the beauty and pageantry of the Efik Culture is possibly complete without mentioning the band.

The band will prove just how good and colourful it is when it showcases aspects of Efik culture on August 15, 2010. The venue is the Grand Ballroom of the Eko L'Meridien Hotel and Suites in Victoria Island, Lagos.

In partnership with Starcomms and Shark Drink, the band is expected to present a dance drama that tells the story of the Efik Kingdom. Nollywood stars, Kalu Ikeagwu and Lilian Bach are both playing significant roles in the dance drama.

On her part, Senator Ita-Giwa said that apart from entertaining the audience with exotic and electrifying performance, the performance will take the audience on an unforgettable journey through time and space in Efik history.