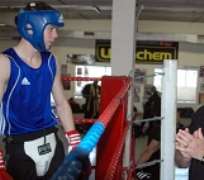 European Bantamweight Champion Luke Campbell, who is set to be back in action again this weekend at the Four Nations Challenge in Sheffield, will be a guest on Steve BunceÆs BBC London Radio show (94.9 & DAB @ 9pm) this coming Thursday evening.

Luke, who victoriously returned to international duties last week with a convincing 11-5 points win over ChinaÆs Jun Tan at the WBC Night Of Champions in Cardiff, made history by becoming the first British amateur boxer to secure a European title for 47 years when he was crowned the Bantamweight (54kg) Champion at the European Championships in Liverpool in November 2008.

His path to glory was not an easy one. In the quarterfinal he faced and defeated the Moldovan Olympic bronze medal winner, Veaceslav Gojan, before progressing to the final after an excellent 4-1 points victory over GermanyÆs Denis Makarov. The quietly spoken 21 year old, from Hull, then secured the Bantamweight (54kg) title by defeating the highly experienced Bulgarian Detelin Dalakliev. Even more impressive was that this was his event debut.

Speaking from his training base in Sheffield Luke said, ôItÆs been a great week for me. I got to return to international competition with a very good win. I also got to meet some of my boxing heroes in Cardiff. Meeting Roberto Duran was the highlight of the weekend. HeÆs my all time hero.

Now IÆm going to be on BunceyÆs show. IÆm a big fan of Steve and really enjoyed being a guest on his Setanta show last year. ItÆll be good to catch up with him again. I canÆt wait.ö

Tickets are now on sale, through Arena Ticket Shop - www.arenaticketshop.co.uk - for the Four Nations Challenge and are priced: