NOLLYWOOD AND GHOLLYWOOD CONVERGE FOR BURSTING OUT AND HOLDING HOPE. 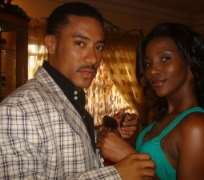 MAJID, GENEVIEVE DAZZLE IN BURSTING OUT

Nigerian screen diva, Genevieve Nnaji and famous Ghanaian actor, Majid Michael are at it again as they put up stellar performances in the yet-to-be premiered Royal Arts Academy Production's flick, Bursting Out. The duo whose last feature together was in the movie Silent Scandal where they were the lead actors play the leading roles in Bursting Out which will premiere on August 8, 2010. Bursting Out is a romantic comedy which humorously shows the expectations of the Nigerian society on the single career woman. Zara's friends share these societal views and force Zara through a series of dates in a bid to marry her off. Zara isn't swayed by any of the men and insists that she's happy alone. But is she really?

Bursting Out is produced by Emem Isong and directed by Desmond Elliot and Daniel Ademinokan. The premiere of Bursting out on Sunday, August 8, 2010 at Silverbird Galleria, Lagos will be done alongside another Royal Arts Academy Production master piece, Holding Hope. The story was written by Uche Jombo, Emem Isong, and Uduak Uguamanam. With impressive cast such as Uche Jombo, Desmond Elliot, Nadia Buhari, Biola Williams, Ngozi Nwosu, Rukky Sanda and many others, we just have to hold our hopes on this one. Speaking on the movie, Bursting Out, Uche Jombo said “we want to make people cry, laugh and perhaps pause and think at the same time. It's a movie that we intend and want people to see in the cinema, and be moved by it, cry about it, and at the same time, laugh. Really, life is too short, as there are things you can change in life, but there are also things you cannot change.' The trio, Emem Isong, Desmond Elliot and Uche Jombo, the brains behind Bursting Out, are set to out-do their first outing and prove to all and sundry that the success of their first outing was not a stroke of luck.

Ghanaian actress, Nadia Buhari will this weekend storm Nigeria for the premiere of Bursting Out and Holding Hope. Nadia, the face of Devon whose last appearance in Nigeria was before the $2000 slam on foreign actors and actresses is expected in the country to grace the premiere and also be one of the actresses to be on the red carpet. Nadia who stars in Holding Hope alongside popular Nigerian actors like Uche Jombo, Desmond Elliot, Biola Williams, Ngozi Nwosu, Rukky Sanda played a lead role in the movie which narrates the story of Mrs.Badmus and her wayward son, Sidney; for Sidney to inherit the wealth of his mother who is dying of cancer, Sidney must cross an uneasy stumbling block. The movie springs complexity out of a not complicated plot. The story was written by Uche Jombo, Emem Isong, and Uduak Uguamanam.

On Sunday, August 8, 2010, at Silverbird Galleria in Lagos, it will be reunion time for Nigerian and Ghanaian actors and actresses as the two movie industry will be reunited on the red carpet for the premiere of Holding Hope and Bursting Out. Since the $2000 slam on foreign actors, this is the first time actors and actresses from both countries will be meeting. Expected at the premiere are Nigerian stars like Genevieve Nnaji, Uche Jombo, Desmond Elliot, Omoni Oboli. Nadia Buhari, the face of Devon whose last visit to Nigeria was before the $2000 slam will this weekend storm the Silverbird Galleria for the event. Nadia who stars in Holding Hope alongside popular Nigerian actors like Uche Jombo, Desmond Elliot, Biola Williams, Ngozi Nwosu, Rukky Sanda played a lead role. The story was written by Uche Jombo, Emem Isong, and Uduak Uguamanam. In a related development, Majid Michael will also be expected in Nigeria on Sunday, August 8 at the same event. Majid who also featured in another Royal Arts Academy Production movie, Bursting Out will be gracing the venue of the premiere of both movies. Produced by Emem Isong and directed by Desmond Elliot and Daniel Ademinokan, Bursting Out stars Genevieve Nnaji and Majid Michael.

Holding Hope and Bursting Out will premiere on Sunday, August 8, 2010 before doing rounds at 'community cinema houses' across the country cast crew of Bursting out