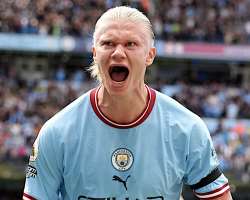 Haaland bagged a hat-trick on Sunday to help Manchester City beat Wolves 3-0 in the Premier League.

The Norwegian returned to scoring form in a 4-2 win over Tottenham in midweek before firing in a hat-trick against Wolves, after weeks of going blank.

Describing the player, Redknapp in an interview said: “Another hat trick at the weekend for the goal machine. His movement is almost unstoppable, and his desire to score is what separates him from the rest. We could be looking at a record-breaking season from him.”